With an apocalyptic crack and a blinding flash a bolt of lightning hit the town dead centre of the tourist district and everything went dark. It was like a bomb had gone off – all shop lights, neon lights, ATMs, music, even the streetlights blinked out: only the gas and charcoal cookers from the food stalls provided any light at all. What was a noisily buzzing market milling with people and vendors collectively recoiled and then froze, eyes wide, looking at each other nervously.

Then came the wind as the storm front finally hit, tossing the food cart areas into chaos and blowing the cheap t-shirts and thin thai cotton dresses off their hangers, sending the shopkeepers scrambling.

Finally came the rain. Driven almost horizontally by the wind it tore through town in seconds, stripped leaves off trees, and shocked people into motion, sending them scurrying into the nearest shop or under the closest awning for shelter.

It was freaking awesome.

My first REAL tropical storm since Ive been here.

By this time I was completely soaked, which was nice following the heat and humidity of the trip up here. So I ducked into a crappy tshirt shop and waited out the storm.

The whole affair lasted about 15 minutes – torrential rain, driving wind, and intermittent lightning. And then like turning off a tap, it was done. 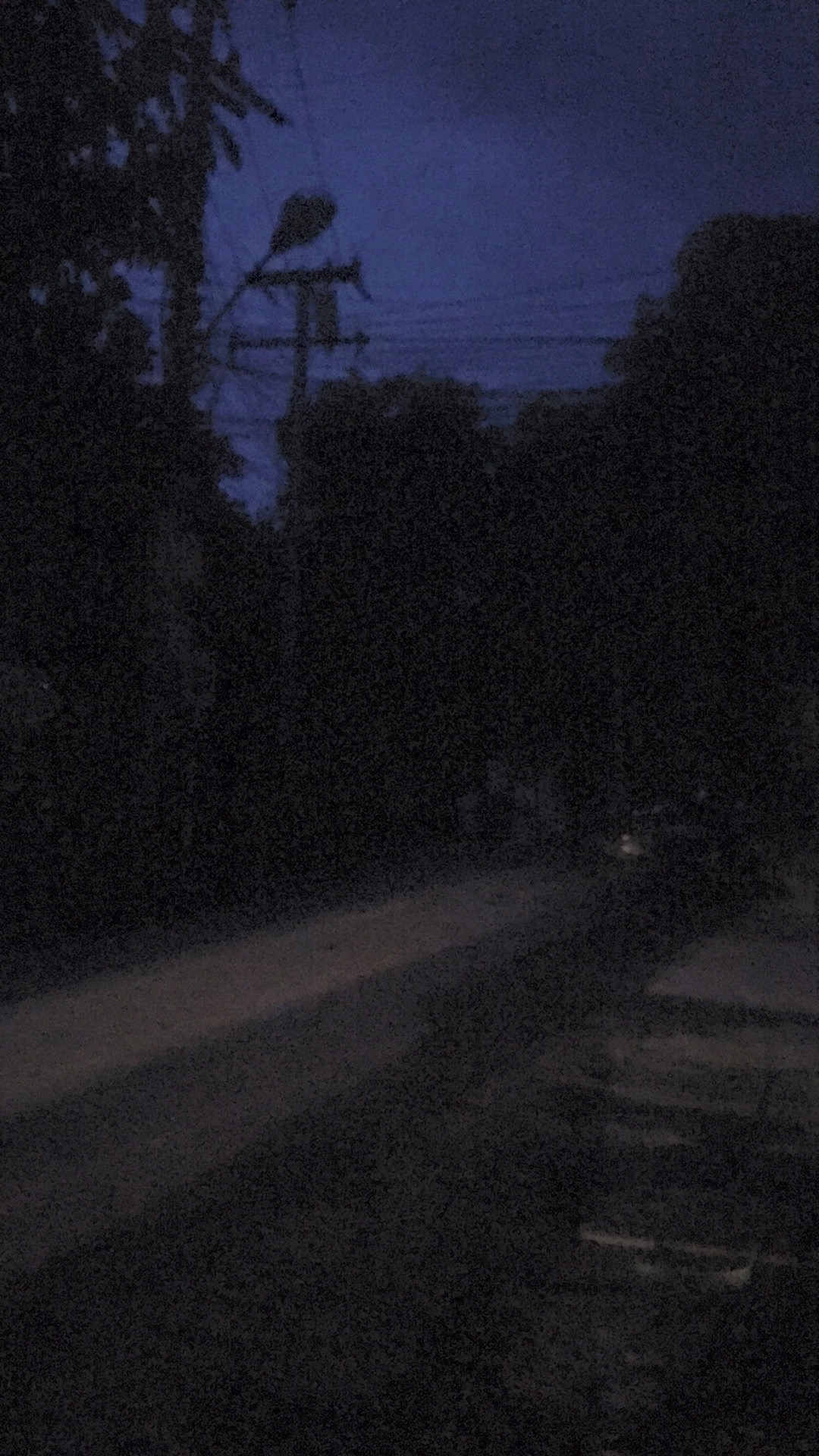 Slowly, the people emerged from the doorways, and the shopkeepers assessed the damage. One by one, out came the emergency lanterns, torches hung on string, oil burners and even yellow and red candles, until the street and storefronts were eerily backlit by the flickering candles or harsh incandescent torchlights.

For the rest of the evening, the township functioned on candle power. Food stalls quickly sold out of food as the restaurants closed up. Some soldiered on, lighting candles and reducing the menu, but the majority gave up for the night. No coffee machines, no blenders, no ATMS. Luckily I’d grabbed a handful of bbq’d pork sticks and something that looked like chicken balls (was soy as it turned out) so I was set.

So that was my dramatic introduction to Pai. All I had to do now was find my hostel.

Donning my trusty headlamp (don’t leave home without one, kiddies), I wandered over a rickety bamboo bridge that spanned a swollen muddy river towards what I’d hoped was my hostel – the Darling View (it rated well on HostelWorld.com)

Perched on a hill overlooking the town and the valley itself, this turned out to be a surprisingly awesome hostel – $10 a night for a private room, a mattress on the floor (comfy though) and an electric fan – LUXURY! It was the value-adds that made this place though. Firstly it was massive! Shared rooms and dorms and private rooms all mashed together over several wonderful old-school teak constructed Thai buildings. It was designed to bring people together with large common spaces, guitars and campfires, and amazing views over the valley from the verandah. Perfect reading spot and in fact that’s how I ended my first night (and the second), on the verandah reading while the other backpackers partied downstairs. Not exactly social but hey, i needed my peace. 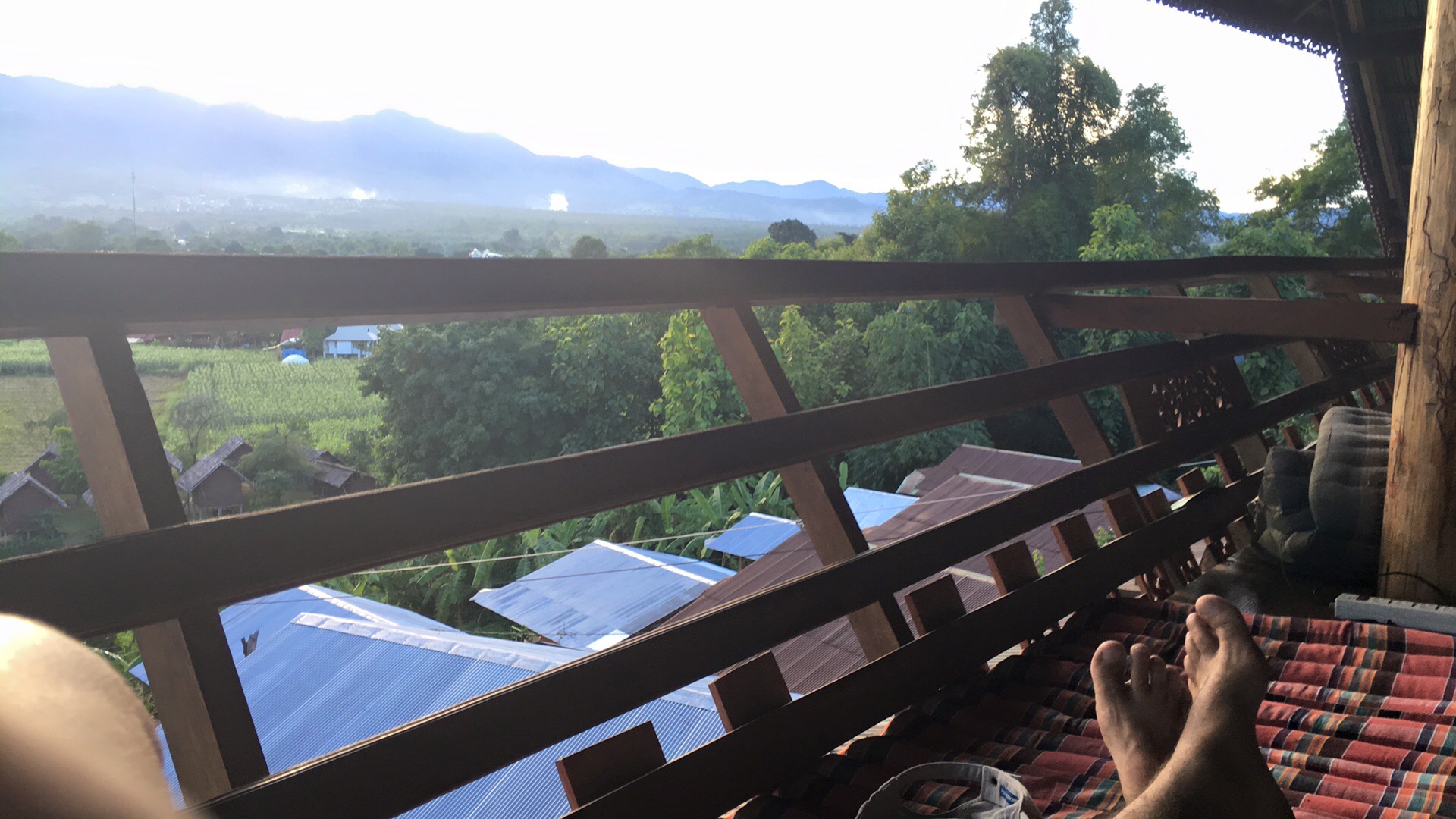 So Day 1 – over. An early night and a good sleep was well overdue. Earplugs in – ready, steady, sleep.

…on to the many beautiful waterfalls scattered around the valley, and some more of the twisting and turning mountain trails. Perfect.

That evening the hostel was deserted, so more than just a little sunburnt I grabbed a beer and enjoyed the empty hostel, restringing one of the guitars to left handed mode and spending a while just musically doodleing on the balcony until the drunks returned.

Pai was so lovely and the local eateries were amazing, but even after 2 days it was wearing a little thin – especially as the power was out for over 24 hours. Plus too many drugged up partying european tourists at the hostel was becoming annoying. I  must be getting old but I’d had enough. No hot water or wifi? I’m so outta there.

Surveying the damage from the storm the next day, I realised the extent of the damage and why it had taken so long. The lightning strike had nailed a transformer and the wind had torn down almost an entire street of electrical lines. There were police and utility trucks everywhere trying to repair the damage. 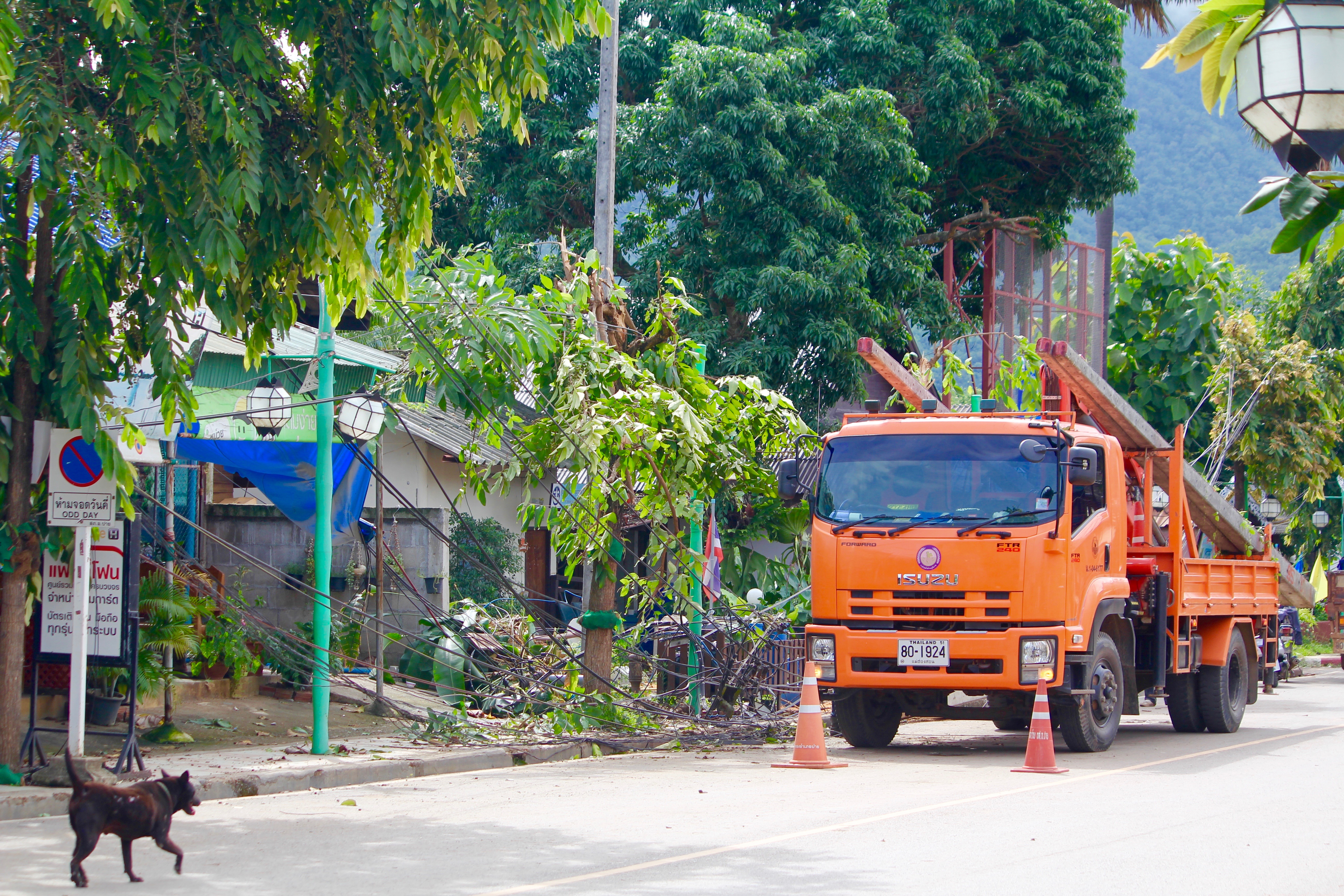 Day 3 –  Still no power, so I bailed, leaving early in the morning to beat the storms and bike back over the mountains.

…this is where the cows come in. They are creatures of magic.

When Jen and I were driving after dusk in Kakadu last year (yeah yeah I know – I’ll run out of Jen stories eventually), she was driving really really slow and a goddamned buffalo appeared out of nowhere right in the middle of the road. It has been standing bum towards us on the centre line and was for all intents and purposes invisible. If it hadn’t turned its head and looked at us we would have hit it up the bum. It freaked us out and that was before the accident.

Anyway, back to now.

After the uneventful ride up to Pai a few days before, I was getting a little cocky (which happened to be my nickname in primary school actually, but I digress). Taking photos on the bike while going round bends, trying new video apps, basically being a dick asking for an accident to happen. My super carefulness had disappeared.

It was then that reality decided to send me a wake up call.

I’d just done making a little time lapse video on the bendy bits of the road, pulled over and put the camera away, and decided to try to make up some time. Let try to speed this trip along a bit, so I floored it.

Scooters aren’t road bikes – they’re meant for flat well constructed roads. But its easy to fall into the trap of believing they are safer than they really are. So falling into complacency is a real killer – like not wearing a helmet, like riding in flip flops, shorts and tshirts (which I’m constantly bitching about then OTHER people do it). Plenty of people have died on this road as evidenced by the many memorials along the roadside (which I’d stupidly thought were bird feeders) 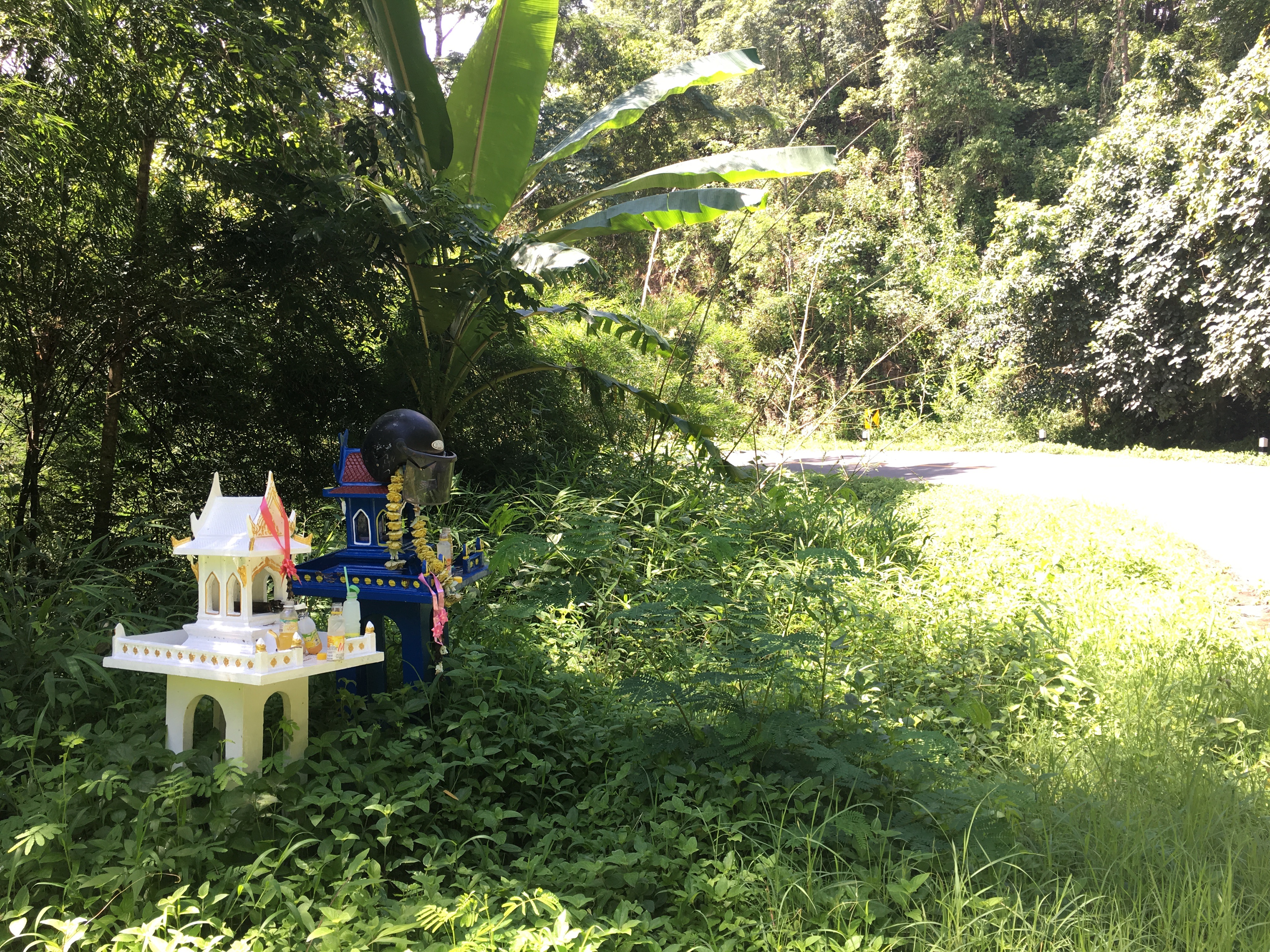 ANYWAY…i was zooming down some amazing hairpin turns, overtaking cars and minivans, dodging the piles of cow manure on the road (that’s odd), and generally going just a little too fast.

…just sitting there in the middle of the road.

Flashbacks of the cow in NT and the buffalo in Kakadu came back, I hit the brakes and the scooter slid…and slid…and slid… finally skidding to a stop a few meters from these stupid bastard buffalo.

Who just looked at me and blinked like the bovine morons they are.

I freaked out more than a little – heart pounding, eyes wide, a real stress reaction – an adrenaline rush but not in a good way.

RULE NO 1 : Don’t speed downhill on a scooter. They don’t stop well.

RULE NO 3 : Cows are transdimensional creatures and can appear suddenly out of thin air.

Anyway after that I scooted back a little to regain some composure, check the skidmarks both on the road and in my pants, and took a few snapshots – quietly hoping a semi trailer would fly around the bend and take these fuckers out. It was not to be and they wouldn’t move even for vans and motorcycles that slowly drove around them and tooted their respective horns. I calmed down after a bit, put on my helmet, and sloowly scooted around them.

The rest of the trip was uneventful and the trip back down the mountains was even more fun, with more temples and townships and tourist stops. 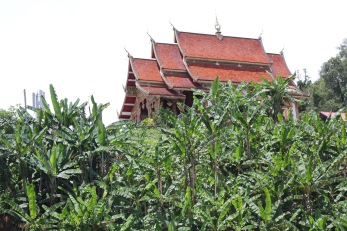 A perfect trip…except for those cows.