So far I have packed 4 times (not unusual), stopped myself from buying shit I don’t need (highly unusual), and caught up with friends (lucky as its a long weekend and everyone’s away). Totally running out of time but still procrastinating massively today. The jetlag and alcohol means sleep escapes me, and when it does come my dreams are a confusing mess of self doubt and worst case scenarios.

I am Jamie’s rampaging insecurity.

Of course I’m going to write about it…but for today there’s this.

Getting back into the country on Tuesday was much smoother than I’d expected, even when I lost the usual day with the time zones weirdness. It was 5am Sunday morning – my farewell-induced hangover was barely in check, the flight from Seattle to Honolulu was on time, and traffic on the i5 was light. Shay dropped me off at Seatac dead on 6am after the 55 minute drive up from Olympia.

See you in Nepal next year, Shayster 😉

Check in was a breeze and even the TSA lines weren’t unbearable. On time all the way,  the 5 hour flight to Honolulu passed in a blink – even the 35 minute transfer in Hawaii went perfectly, giving me 4 entire minutes to buy a Hawaiian shirt on the way to the Gate. The only worry was luggage transfer, but I’d convinced myself it would be ok and as usual had packed all the essentials in the carry on.

Arriving in Sydney 11 hours later, the luggage met me at the carousel and passing Customs and Immigration was ultra fast. Ooops  – totally forgot the beef jerky in my bag!

Now only one thing was left.

Once the decision to keep my money in my pocket was made, Sydney Airport transit became a challenge more than a financial crisis. Usually the vampiric cash drain starts from the moment you set foot there and a cash sacrifice to the Goddess of the City of Sydney is needed to survive at every step.

The City of Sydney (at least in my minds eye) is a vampiric old barslut in Victorian lace that sidles up, quietly slips her grimy hands into your pants and while dazzling you with technique, steals your stash, shivs you in the kidney and then leaves you bleeding out in an alley.

I wage a constant war to stem the flow of cash from my wallet into her voluminous coffers. Look the harbor is nice but this hoary bitch sucks the State of NSW dry revenue wise. And Sydney people – jeez don’t get me started.

Due to the odd flight schedules and curfew, I got in at 7.30pm, but couldn’t fly out til 7.30am the next day. Sydney International Airport (pssh) closes at 11pm and if you have en early flight, you only have a few options : these include book a $300+ hotel room at the Airport hotels nearby, catch a $20 taxi and book a $200+ hotel room 1.5 kms away (if there are any), book a city Hostel at $45 a night and then take a $16 train ride (each way) and then HOPE the return train arrives on time or the flights aren’t cancelled.

You get the idea. Sydney is expensive and Sydney Airport doubly so and there are little services offered to the budget traveler.

BUT – I found out that they do put aside a small waiting area inside the main terminal near the train and taxi entries for “transit passengers’. You can sleep there for free, on a chair or on the carpeted floor. There’s free internet and an internet terminal (till 11pm when they turn it off), a phone recharge station, there are toilets available but no shower, and you have to sleep with your bags tucked under your arms etc as there is no real security. There were about 5 transit passengers sleeping there when I arrived, and after an hour or so that grew to 40 so get there early.

So I thought, why the Hell not! I found a spare leather chair (mmmm worn sweaty pleather) and flopped down, wearily hatching a duffel bag and nursing a backache/headache from the 15 hour flight from Seattle/Honolulu.

Its cold, the security guards will harass you at odd hours and demand to see your ongoing ticket or at worst kick you out if you don’t have one. I arrived at 8pm, and flew out at 7.30am (well within the acceptable 12 hour window) so was ok to stay.

*They don’t like doing letting people do it apparently, but it’s definitely available.

After a less than optimal but FREEEEEEEE! night in Sydney, I began the new day by fudging my carry on and baggage weights as best I could.

Coming from an International carrier (Hawaiian Airlines) that allows 2 x 16KG bags and 2 carry on bags I’d loaded up on gear in the US.

Their excess baggage fees completely freaked me out so I spent the morning putting on multiple t-shirts, 2 beanies and several pairs of heavy pants plus 3 jumpers. Strapped every heavy Item available to my body, and finally slung the Beats headphones around my neck. Walking like John Wayne, looking like the Michelin Man and sweating like a Muslim at a Patriot rally.

Waddling over to the T-Bus stop, I boarded for the Domestic Terminal, which is minimalist but efficient and at 7.30 am sharp was ready to roll (after a minor panic about timezones and missed flights) .

Convincing Airport Security that the massive metal Slackline winch in my bag was a delicate instrument that couldnt be checked was a challenge ( I can actually act a bit, it would seem) but I eventually boarded the world’s prettiest, narrowest and most insecure aircraft and headed West. 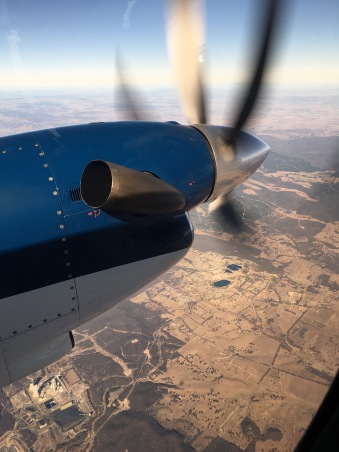 Before long, this narrow aluminum bullet was winging its way out to the dry dusty plains of Dubbo, and as the landscape below shifted from green to dirt, my spirits drooped as expected.