Its easy to lose track of time when there is no discernible difference between day and night – its all the same here. Just a small variation in the quality of the light. Bright midday sun all day long heightened by the constant blazing glare off the snowcover and the glistening ice, softening to a false dusk and then shortly after its sunrise again.

I can’t sleep so I’m blogging. It is Sunday after all.

The biggest surprise of today is that the snow here is very very dry – the driest I’ve ever seen but that’s not saying much since I’ve seen so little – like when melting water from fresh snow apparently its take almost twice as much snow to make half the amount of water…or something like that…math was never my thing.

You can pick it up in your hand and your hand doesn’t even get wet – so weird. It feels…chalky. 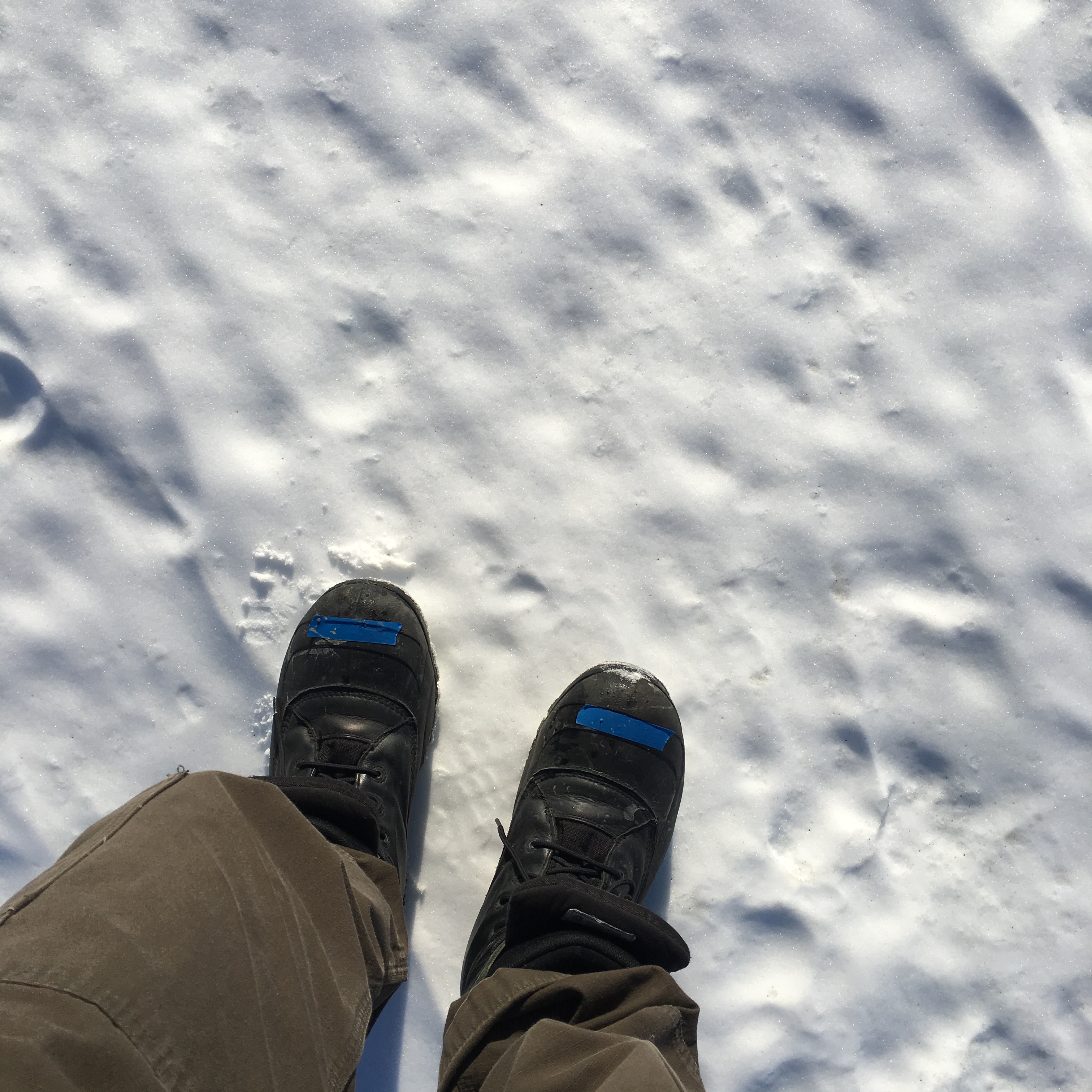 Black ice is everywhere (I know what that is now, as Ive never really seen it or understood what it was before) and several people have slipped and hurt themselves already – its treacherous and tricky to walk around outside especially as the rocky landscape is angular and unstable at the best of times. Add crusty honeycombed snow cover and black ice everywhere, its a real gamble just walking about. There’s a a chance that if you slip and break your arm/leg  before the ship leave that you have to go home, so people are walking on eggshells outdoors just in case.

The environment down here is magical and the record 22 winter blizzards have left their mark. Rapidly melting snowdrifts and crystal clear icicles form random art installations sculpted by the summer sun – this place is almost a natural modern art gallery now. In a month or two it’ll all be gone though – even the sea ice. The curiosity of a endless static snowfield replaced by the open ocean, returning penguin colonies and the local elephant seal population roaring away in a nearby wallow. Unless a summer blizzard comes 🙂 I kind hope it does.

How fortunate do I feel to have this unique opportunity? – very.

I’m starting to go out more and more to explore the station limits on my own (its been too busy otherwise). Tomorrow I’m going to walk out on the sea ice, head out to the ship before she sails on Tuesday. It’ll be odd to see the Aurora Australis sail away as this means I’m an definitely stuck here for the duration – its a very final feeling. But then the real expedition starts, and the specialist science and engineering teams will head out into the field and do their thing. The real work begins.

You can see everyone bonding already here – most people seem to know each other from previous expeditions – but its a place that really fosters mateship and everyone is very open and friendly, at least so far. I can see how people keep trying to come back time and time again. I’m trying to make friends but I’m a team of one and a feel a bit like the last one picked at soccer practice at the moment. It’s my school formal all over again. Being super friendly and uncomfortably sociable so hopefully that’s gonna help break in.

I sent some postcards today – the last post went at 7.30pm from the old Post Office here at Davis – a small round red and white building that used to be one of the original huts build on Heard Island in 1957. It was decommissioned and transported here back in the day, and rescued as the new Post Office – we also have a Postmaster – an official Government role with official stamps and everything. Very weird.

After that I wandered over to the Music Hut / Band Room that they have here to suss out the musical intruments – no left handed guitars as I’d hoped (knew I should have brought one with me) but loads of acoustic, electric, drums, and piano/keyboards. I was hanging in the band room last night doodling around on a guitar and a few of the other guys came in and we stated chatting. There quite a few musicians here this year and If i can restring a guitar lefty-style then I can join in and jam. Should be fun! 🙂

The accommodation here is really cosy and cute – small but comfortable single rooms – I lucked out and got a room with a second bunk so I have a little more storage than most. There’s not enough room to swing a cat but there is just enough for a quiet meditation in the morning and even a little yoga practice!

*Just now the guy next door is snoring his head off – his time on Earth is short.

The shutters automatically close and lock at 10pm and can’t open til 6am – it scared the crap out of me the first time. There’s a Lidar dome and light sensitive scientific experiments nearby to any ambient light in the evenings if a no-no. Hence the lockdown. It’s a bit like a horror movie when they come down though – feels a bit ‘trappy’.

This week has been a blur really. We are still balls deep into the Resupply operation and been working around the clock – 12 hour rotating shifts to get all of the cargo unloaded, the fuel and water transfer completed, and the Personnel handovers  finished. Ive been really lucky in that I didn’t have duty on resupply ( yay) it that I got flown over. It was so much fun and such a thrill to be flying over the endless ice. As the only IT dude I qualified as critical – I got flown off the ship by chopper days ahead of the bulk of personnel – tickled my ego immensely .

The reality though is that almost EVERYONE that has arrived has had IT issues and that’s been my constant role for the past 3 weeks almost – while cleaning my teeth, while I’m getting dressed, making a coffee, in my room, and even while I’m trying to put a fork full of pasta in my mouth – to sort everyone out immediately and get them operational. Or at least get their Facebook and email to work . Its always fun but as the Internet here is a bare trickle over a heavily oversubscribed satellite link, its now very frustrating – especially constantly explaining to people about procedures and rule while they complain about their Facebook isn’t loading like back home, or instant messaging and Snapchat doesn’t work ( its blocked) or the 200Meg video of a seal they are trying to send to their kids isn’t going through (but why can’t I send it?)

Because we’re in fucking Antarctica.

*i was going to delete this but that didn’t seem honest plus it’s a nice indicator of how tired I was yesterday… enjoy my vitriolic rant. Feel free to skip it though.

So I explain time and time again – over and over and over “But this is a government network with internet proxies and rules and shit”.

And we’re in fuckin Antarctica.

Meh noone cares and just wants their video to upload. Who cares where we are. Screw corporate data. Fuck meteorological and scientific data upload requirements, I just want my MTV. Where’s my Netflix?

“Why did you block my iphone from the wifi?”.

“Well because you downloaded 4.5 GIG of itunes crap/pirated movies/tv shows over our tax payer funded satellite link in 48 hours during which noone else could use the Internet, dumbass”

Ahh in the good old days of 90’s IT I could get away with telling it like it is . HA!

Now it just becomes “hmmm really?” and then its now my problem to find out why your damn phone/laptop/tablet is doing it, quietly knobble it and not rock the boat.

That’s the public face of what I do here – Phone bitch and Internet wrangler.

That bugs me a little  – yes I know its just ego – but man it REALLY IRKS ME now I think about it.

In an environment full of tradies, Managers and scientists, most people here have two or 3 personal devices (tablet, phone, laptop) and rarely does anyone actually have a clue how to set them up.  Its just “my personal phone/laptop/PC doesn’t work – that’s now your problem Jamie – I don’t need to know how to use something or that I created this issue by ignorance – you just make it work how I want it to IMMEDIATELY).

Behind the scenes I’m looking after systems that everyone relies on but people rarely see or even think about; network administration, managing switches and routers and satellite links, server and systems maintenance, managing active directory, email groups and operations, system integrity, backups, printers, voip and telephone systems, data security, redundancy and disaster recovery – but none ever sees all that . Its the curse that comes with any IT role – you only become visible when something breaks and only important for the time it takes you to fix it, and then back into your little cupboard you go.

Grrr. This is why I dislike IT work now – it also irks me and makes me curse a lot. I’ve tried to get out but it just keeps dragging me back in. Like the freakin mafia.

ANYWAY the long voyage and then working 10 days straight is making me cranky and its a bit like groundhog day at the moment here. Work/sleep/work. The ship leaves on Tuesday and then (rumor has it) well get 3 days off and the bar will be open.

Well deserved beers for all AND hopefully none will ask me to fix their phone when the bar opens, cos after a few beers it’ll probably end up lodged in a penguins arse. Or theirs.

Tomorrow is another day…maybe a more positive post then, but remember this blog is also for my benefit as well.

But til then, raindrops on roses and whiskers on kittens … I’ll simply remember my favourite things and then I won’t feeeel so baaaaaad!