Crazy coincidences make travel so unexpected and fun. This a rambling tale but bear with it.

Yesterday I travelled up to Chiang Dao, Northern Thailand – about 50km from the Burma border and just simply stunning mountains, rice paddy’s and lush dense jungles. Imagine the Warrumbungles covered in dense jungle and tropical rainforest, veiled by cloud – the topography is strangely similar.

My good friend CB had introduced me to an old colleague of hers, Richard B, over dinner.  A fascinating Melbournite with a history of political activism in the region. Since leaving that lifestyle behind, he and his lovely wife J, have over the past 10 years built and developed a unique Arts and Theatre space called Makhampom just out of town. Charles Sturt University run an 18 day program here for students that Richard and his team facilitate. Luckily I’d been given the opportunity to check it out.

Makhampom program  – click for info. Saves me explaining it 🙂
Its a 90 minute bus ride from Chiang Mai on a good day, 40 baht each way, and amazingly a cool, overcast but not yet steamy morning – perfect for local bus travel with no aircon and open windows . It’s wet season now and a daily deluge is the norm so taking the motorbike was a bit dicey.

Heading north on the road to the Golden Triangle and the Burmese border crossing wasn’t as busy as I’d thought, and after about half an hour the city gave way to rice paddy’s, and shortly after that misty jungle and muddy swollen rivers. The bus struggled up the hills and laboured around the corners but the driver just persevered, grinding the gears occasionally and slamming on the brakes if a motorbike zoomed unexpectedly past.  What a great way to see the world go by.

So we passed through a busy police checkpoint as we got closer to Chiang Dao – wise to carry your passport with you in his part of the world as they will ask for it at  checkpoints. This time we were waved straight through.

Dropped off outside the 7/11 store, it was only a short walk to Makhampom – about a mile or so. The afternoon sky was brilliant but brooding and you could feel the weather building up to something, it became a physical thing and the air pressure seemed to rise and fall as we walked along the canals.

Wandering past flooded fields, over the small bridge and past the art installations rising from the water, the Centre was unexpected in this very rural landscape, but very welcoming as well. Arriving just in time for lunch but too late for the first performance, I met Richards lovely wife J, and some of the team that run the program. Wonderfully warm people dedicated to their arts. There was some time to wander around and meet people before the second and final performance of the course.

Now for the coincidence I mentioned :

I knew one of the actors there. Jess. She’s from CSU Bathurst ( close to Dubbo where I notionally live).

I casually said “Hey Jess” as she wandered past at lunch – she just looked at me, blinking, recognition dawning, mind blown as was mine. “Whaaaat are you doing here…” And so on. A quick catch up and it was back to work.

I’ve dabbled in writing for the stage and have been involved in local theatre and film for several years – I love it and seem to be ok at it I guess.

Jess was a part of the cast from another play that had ran and we knew each other from there.

Shameless boast –  I’d had one of my plays selected for the original run, and then for a Regional Showcase “best of…” Series that toured the Western Region of NSW.

I even got paid for it!

So that afternoon I got to watch the young actors work (a translator providing the necessary Thai/English crosstranslation as the local Thai actors had little english)  and participate in some of the work shopping and exercises. It was so much fun and strangely comforting to see and hear people from home.

And then after what seemed like only minutes it was almost time to catch the bus home.

BUT just enough time to borrow a motorbike, zoom up to the cave temple and spend an oh so short half hour in quiet walking meditation and contemplation, with quotes nailed to trees along the path to get the busy mind on the right path quickly. 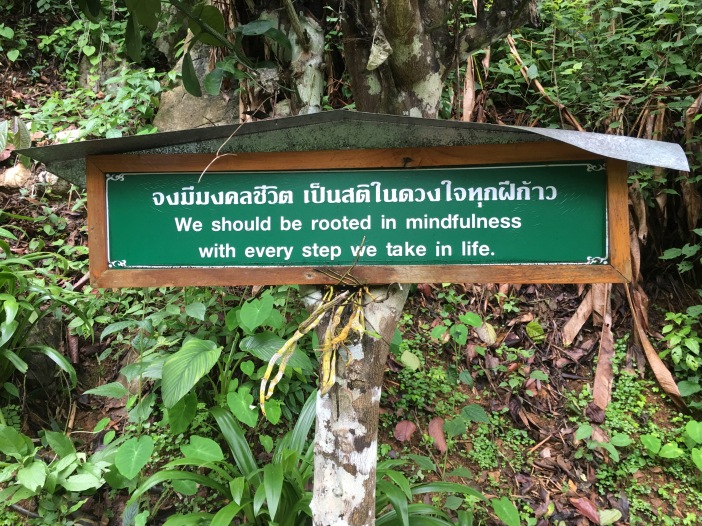 The Wat Tham cave temple here is special and I’ve never seen anything quite like it. Perched high on the side of the mountain, it doesn’t look real and seems to peek shyly through the grey clouds that scud past it at high speed . The main chamber is carved into the very side of the mountain, a natural cave where you can worship and meditate in complete silence. Steep steps lead you up a winding path through the rainforest to the base of the temple complex . Large colorful butterflies surround you and alight curiously on your bare skin. It is completely silent save for the gentle footpads of orange robed monks going about their daily chores.

A place that moves you to silence by its sheer beauty . 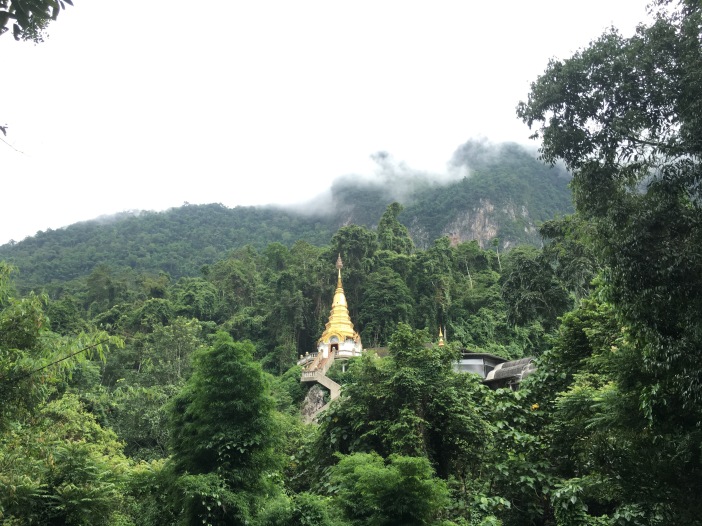 But it was time to catch the last bus. So it was with some regret that we left and caught the overcrowded bus back to Chiang Mai. I didn’t talk much on the bus ride back. I was caught in my own mind and before i knew it Chiang Mai was there.

Leaving the rainforests and all the energy it provides was harder than I thought.

I really missed my Washington and Oregon wildernesses for the same reason.  They reach deep inside you, take root and like the sunshine, recharge the soul. The trouble is once they are in you they never let go.  These roots bind to your bones and embed themselves deep into your heart and mind.  I need these forests and my sunshine to exist now and I will return to them soon

Being back in the city has reignited my wanderlust in a big way. I’m really restless, not sleeping at all and not terribly happy to be sitting still. I have no interest in elephant tours, cooking schools or zip lining here. I need more.

Something I will work on, my restless mind, but it is almost time to move on from here I think.

That’ll do for today – typing on an iPhone still sucks. 8 days til my laptops fixed and then I can go.

Happy 4th of July for my USA friends 🙂