So…its been a little while since I wrote. Has it really been 14 days already?

How have you been?

This will be a bit of a ramble as I catch you up, buuut I have my laptop back finally so I can actually type (that drama is worth a blog entry alone and I’ll revisit that experience in the near future once my Apple service rage subsides). Luckily the coffee here at The Larder Cafe and Bar is conducive to a long stint at the keyboard. So here we go.

After bailing out of Bangkok, I found myself heading for the island of Koh Phangan, down in the Gulf of Thailand and a place notorious for scooter injuries, broken ankles and bandaged limbs, beautiful beaches and full moon parties.

I’d gotten mixed reviews from fellow travelers about this spot, ranging from “don’t go there, its full of drunken tattooed Eurotrash and full moon freaks”, to  “oh wow, there a laid back cool yoga and hippy scene” and “the beaches are beautiful/crowded/trashy/ruined”.

It was sorta hard to make a call based on popular opinion, but as I was visiting a yoga buddy from teacher training last year, it didn’t really matter. I wanted to see for myself. It was beachy, oceany and above all it was new – good enough for me.

Getting there was easier than I’d thought. A quick flight direct from Bangkok (about $50 AUD)  to Surat Thani airport (2 domestic gates, no waiting), an hour and a bit on the air-conditioned bus, followed by a 2 hour ferry trip (both included in the 500 baht ticket price) and I was there! All I had left to do was walk the 3.5 kms to the hostel. Easy!

Unfortunately I arrived in a howling gale;  a dark brooding tropical storm that was thrashing the coastline with a pounding surf and a screaming wind that blew the palm fronds horizontal from the trees, the dogs into the bushes,  and sent the garbage scattered around me dancing madly into the sky. And OMFG the rain!

Quickly soaked to the skin after disembarking the rust bucket ferry from Surat Thani, I squelched over towards the township, stumbling to and fro against the gale looking like a drunken green hunchback (I’d wisely wore my rain jacket over my backpack to keep my camera dry). Strangely enough many people on the ferry hadn’t thought of rain and sought to cover themselves in anything vaguely waterproof they could find. Garbage bags, newpapers, babies, some even dared try umbrellas for a few seconds before the wind twisted them inside out and sent them spinning off into the storm.

It was a little bit hilarious watching a group of delicate alabaster skinned Chinese ladies wobbling randomly along in their high heels and full moon party frocks, eyes wide in shock, umbrellas shredded, soaked to the core, doggedly negotiating the torrents of rain, muddy puddles and random piles of dog shit like a huddled mobile mass of slightly confused ducks.

And such was my inglorious arrival on Koh Phangan. 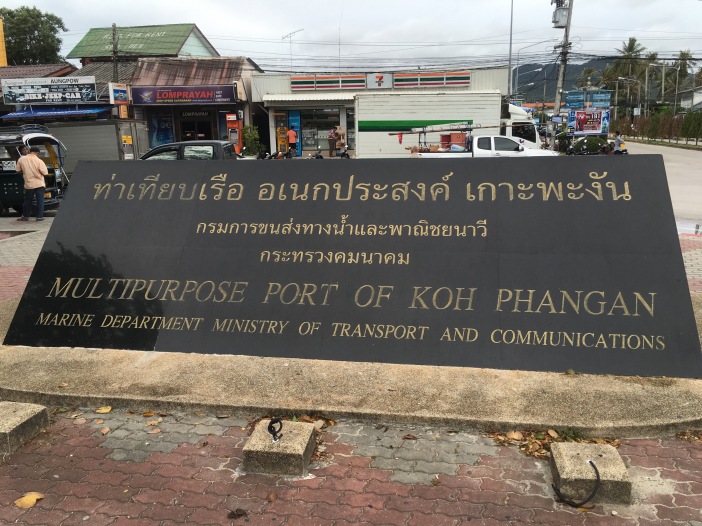 Anyway, by the time I got to Nera’s Bakery (great coffee, open 7am), the storm had blown past. In about 7 minutes flat –  Damn these things move fast here! The sky turned a streaky deep blue, the sun came out and blasted me dry with reflected heat from the concrete pavement that passes for a road in these parts. And that become the pattern for the next few days – cloudy morning, sunless day, massively humid and an afternoon storm to sweep the island clean.

I had booked a super cheap hostel in Baan Tai (NOOOO DONT STAY IN BAAN TAI everyone told me – so of course I had to). It was for good reason as it turns out. Its a Thailand tourist trap at its worst, with girly bars, clubs everywhere, tacky hostels and guest houses and markets with streets full of younger party people looking for a good time/trouble/anti diarrhea tablets in that order. Some might think that is heaven on a stick and if I was 20 I undoubtedly would have loved it. It is not for the faint hearted however.

My guest house looked great on Hostelworld, and got good reviews, but the non stop electro techno music from the bar (even when it was empty) seemed a little desperate and although the hosts were a nice Belgian couple who just sorta hung around in swimmers all day and drank, the french girl on reception was expressionless, borderline rude, and I think incapable of smiling. But it was cheap. You get what you pay for here.

The next day I hired a scooter through the hostel (twice the street cost at 200 baht a day) but easy as I didn’t have to deal with unscrupulous cycle hire owners (of which this place is renowned). I also had to sacrifice my passport to Mr Dodgy scooter guy which I wasn’t happy about but hey that’s what happens here with scooter rentals. But then I was mobile!

Time to explore. I scootered and hiked over the next few days – did the island top to bottom; from Haad Rin to Chaluklum, from Haad Yeo to Haad Yang (almost). This island is simply beautiful, with a central mountain rage that pierces the afternoon storm clouds and shelters the North from the wind, hidden waterfalls, wats and temples, secluded beaches, and tropical forests. And dogs, dogs and more dogs everywhere. Apparently monkeys as well but the only monkey I saw was riding on the back of a motorcycle and was damn near as big as the person riding it. No way I’m feeding that!

Koh Phangan is smallish, easily navigable (if you get lost on this island, please just pack up and go home) and the roads range from almost decent concrete slab affairs through to muddy tracks and 1 lane pathways. A third of the island is only accessible by hiking, 4WD or longtail boat and some of the best resorts and secluded beaches are on this part of the island. Bottle beach is one of these special spots, is secluded and beautiful and has some cheap accommodation to be had depending on the season.

To give you an idea of scale, if there was a highway that ran around the outside (and there isn’t)  it would take you about 50 minutes to ride all the way around (doing the legal 40km/h on a scooter that is) – less if you are a European or Australian tourist who seem to delight in doing 3 times the speed limit, helmetless, in flip flops and wifebeaters, with their under 5 year old child riding on their lap, on the wrong side of the road. As do taxis, trucks and tractors. Its a free for all. Most people crammed on a scooter wins.

Which by the way explains the phenomenon of the Koh Phagnan tattoo. When I first arrived I was curious about the sheer number of people that had scars on their hips and legs, or bandaged ankles, feet and big toes. Finger stalls on several fingers, or even in plaster casts and on crutches. It was then that I became aware of the tattoo. Its actually a thing and the numbers of people that have scooter accidents on this island is staggering.

The rental companies will rent you a scooter or motorcycle if you have a passport, a pulse and enough cash. They don’t care if you can ride or not, they don’t care if you are drunk or high or both. The probably don’t even care if you kill yourself, but GOD FORBID you get a scratch on their scooter. In fact they probably hope you crash. The contract you sign details the replacement cost for parts down to the nuts and bolts – and its 4 times the usual replacement cost. If you trash a scooter be prepared to pay about 4 times the replacement cost of the bike itself. And they hold onto your passport just in case.

Take many photos of the scooter before you sign the agreement as they will try to nitpick about the tiniest details when you return it.

In fact, its such as great money spinner for the island I wouldn’t be surprised at all if the many hospitals and medical centers are in on the game as well. I can see the doctors and nurses taking out the ambulances in the dead of night, loading them up with sand, and strategically shovelling said sand out onto seemingly innocuous sections of roads, blind curves and steep grades, all to catch out the drunken or inexperienced rider and send them skidding into a ditch. And then into hospital where they’ll charge you a fortune for medical care. THE Perfect scam.

So anyhoo after a few days of this chaos and markets and bars, I craved some peace. Tired of the techno and tourists, I wandered onto a nearby resort’s private beach. Finding a secluded spot to read, I noticed on one of the deck chairs there was a brochure advertising Discover Scuba Diving – no experience required. Sweet! I have no experience! Perfect.

I’d always wanted to dive, but was too freaked out by sharks to ever try. Too chickenshit. Jaws had really done a number on me and I’d just watched The Shallows a few weeks back and it still haunted me. But as a kid I’d loved going on holidays to the coast back home and was fearless in the ocean – snorkelling like a demon, chasing fish, feeding groupers, spending hours alone exploring the ocean and Barrier Reef when I was little.

As an adult I’d become a overly cautious pussy.

A little devilish voice inside my head whispered “Hey do it man…why the Hell not?” Exactly! Why the Hell not, indeed. That’s why I’m here isn’t it? To push my boundaries a bit. Live a little.

So I put the brochure in my pocket.

The next day I scooted the 10kms up to Chaloklum, a sleepy little fishing village up north and far away from the crassness and trash of Baan Tai. I wandered into The DiveInn and chatted to the lovely co-owner Fern. I paid my money and before I knew it I was filling out medical forms and waivers and then…shit. It was happening.

The DiveInn <- check these guys out. Such a good dive shop.

Usually they do the PADI Discover Scuba diving thing in a swimming pool for skills development, then maybe in the ocean for a simple dive with an instructor holding your hand. But they were busy. So I was given the choice – I could do it in a weeks time in the pool or start tomorrow in the open ocean, quite literally throwing myself in the deep end.

So being the adventurous/careless/stupid soul that I am, I opted for the open ocean dive. 50 minutes by boat in the Gulf Of Thailand. My briefing and skills training would happen on the boat on the way to the dive site. My first breath in Scuba gear would be in the open ocean. OK …nothing like a challenge to get you out of bed in the morning.

Fern took me through all the photos up on the wall of the sea life that I would see tomorrow – barracuda, moray eel, sunfish, batfish, bull sharks, anenomes, artifical reefs teeming with life, maybe even whale sharks…wow!

I left The DiveInn excited and buzzing (probably from all the awesome coffee I had at The Worlds End cafe next door). I was going to Scuba dive!!! Finally!

But later that night, as I lay in bed, the coffee wore off and I thought about it a bit more.

Uh oh…hang on did she say Bull sharks? Noo that cant be right…they’re super aggressive…Open Ocean. Diving 18 metres under it. Swimming not my strong suit. Mortality. Death. Shit.

What have I done…?