Sometimes I have nothing to say.

Its extraordinary…shocking even and for the people that know me well, quite disturbing.

It’s the “I’ve got a bad feeling about this” Star Wars moment.

I welcome it when it happens, it just doesn’t happen a lot.

The restlessness of my mind usually generates a constant background hum and a need for continual motion.  As a good friend recently noticed, it even supplies an audible soundtrack to my daily activities. I hum and ‘doo de doo’ a lot,  sing sentences at times even though I don’t realise it. Talk incessantly. And that’s my resting state.

Now…imagine that after 2 or 3 Americanos. Crazy and annoying to more enlightened, grounded types I’m sure.

Honestly, in my life moments of actual stillness are few, but when they come, oh boy…

So in lieu of a regular conversation I’m blomiting (‘blog vomiting’ – there you go I’ve created a new term) these thoughts out of my limited headspace for your enjoyment.

I’m not sure where I’m going with this so just come along for the ride. Let’s digress…

Stillness. I struggle with it daily.

Moving from my day to day routine to hanging with calm minded yoga people is like running full tilt into a wall of custard and trying to slowly push through it. It drains me of momentum…doesn’t quite stop me dead in my tracks but thickens the space around  me…I feel this as an almost physical sensation … a “slowing”. It’s disconcerting and such a different energy…also quite frustrating as I generally function at full speed (vibrating at a different frequency maybe, I don’t know) and it takes a real mental effort to throttle back.  As a lot of my friends are yoga teachers it is challenging to say the least.

(I recently had a yin yoga session at a friends studio, accompanied by Tibetan singing bowls – during this I experienced this ‘slowing’ again as well as an unexpected but defined energy flow up and down my spinal column – a friend remarked that after this I seemed the most grounded that I’d ever been since we’d met- interesting eh? Imagine if that could be a resting state. More on this another time … Remind me ok?)

Yes I know it takes work and yes meditation will help. Thanks. I’m a work in progress.

How do you know when it happens?

One notable moment for me was on the Bremerton ferry from Seattle a few months back after a late night out with Jen (yes that again). Sitting across from one another, gazing into her eyes… I just didn’t have anything to say. I felt at peace. It struck me as so odd I felt the need to comment “I have absolutely nothing to say to you” – yep, tactful as always…needless to say she was not impressed.  FYI that is NEVER a good thing to say to your significant other.  Looking back I can see that I was simply happy and had a moment of stillness – also how tactless that may have been and it possibly foreshadowed the events that followed. Anyway … lets get back on track.

So why am I blogging about stillness if I have nothing to say?

Well on occasion even nothing is something and it is notable by nature of its rarity.

I’ve been quietly watching my mind a lot over the past few years. We’ve become…intimate. It loves to run wild with crazy ideas and imagined conversations. It can tell the future, change the past,  read people’s minds and create alternate existences. It loves a plan and is a master of the sneaky ‘what ifs…’.

Traveling alone gives my chattery mindstream unparalleled access and power – gazing absently out the bus or ferry window, these random thoughts sneak and slither, unchecked and unchallenged they conspire,  gather momentum, unexpectedly slap you in the metaphysical face and then dominates the inner conversation. Creates a mental pressure, drives a low mood.  When you don’t speak to anyone for days, this internal monologue cycles and builds, and then when you actually have a conversation with a human being, the experience isn’t fun (for them, anyway). Its a face full of scattered babblevomit – a burst of random thoughts and ideas that have to escape the mind but so full on and unrelenting  it can overwhelm others.

There is no mental release,  just a brief joy from connecting and then the thoughts start to sneak and slither again, waiting for the next chance to escape.

This stillness thing is tricky.

But watching the mind is a fascinating practice. And it is a practice – the more you do it the better you get and the more you see.

Maybe that’s the way to find this elusive stillness that everyone’s talking about .

Which brings me to … Hmmm ..Oh yes – TRAVEL and the visiting yoga buddy!

Meg has been and gone. Seeing her at the airport was like picking up an interesting breakfast conversation at dinner with a close friend – easy, comfortable…normal. We fell into friendship easily a few years ago – just sorta happened that way.  A fascinating person but hard to define. If it helps, imagine a superintelligent doctor-scientist-yoga teacher -spiritualist-model-Disney princess (the one from Brave) so far out of your league it isn’t even worth fantasising about.

We’d last said a hurried goodbye in Bali almost 2 years ago at teacher training and then I was late finishing class, missed her taxi, and she was gone.

The visit came out of the blue and as we’d both come out of some recent unpleasantness it was a welcome escape. We’d planned to not have a plan  – nonspecifically reconnecting and traveling around Northern Thailand for 2 weeks, spending a few days first in Chiang Mai getting oriented, then heading off on her first trip to Thailand, then scuba diving for her birthday in Koh Phagnan.

After a few city days, Meg craved green space, forests and mountains so we grabbed an early red truck from the guest house, went the long way to the wrong bus station, grabbed and merrily confused the closest tuk tuk driver , got to the RIGHT bus station, bought our 40 baht ticket, hopped on a green bus and headed North.

First stop Chiang Dao:  An hour and a bit on the air-cooled (ie open windowed) bus. I’d been there before but a perfect introduction to regional Thailand (without too much shock) where we spent several days scoopying around the countryside along the Beautiful Road.

**this is a Scoopy  – a motorcycle named for fun. Just try saying it and not smiling. 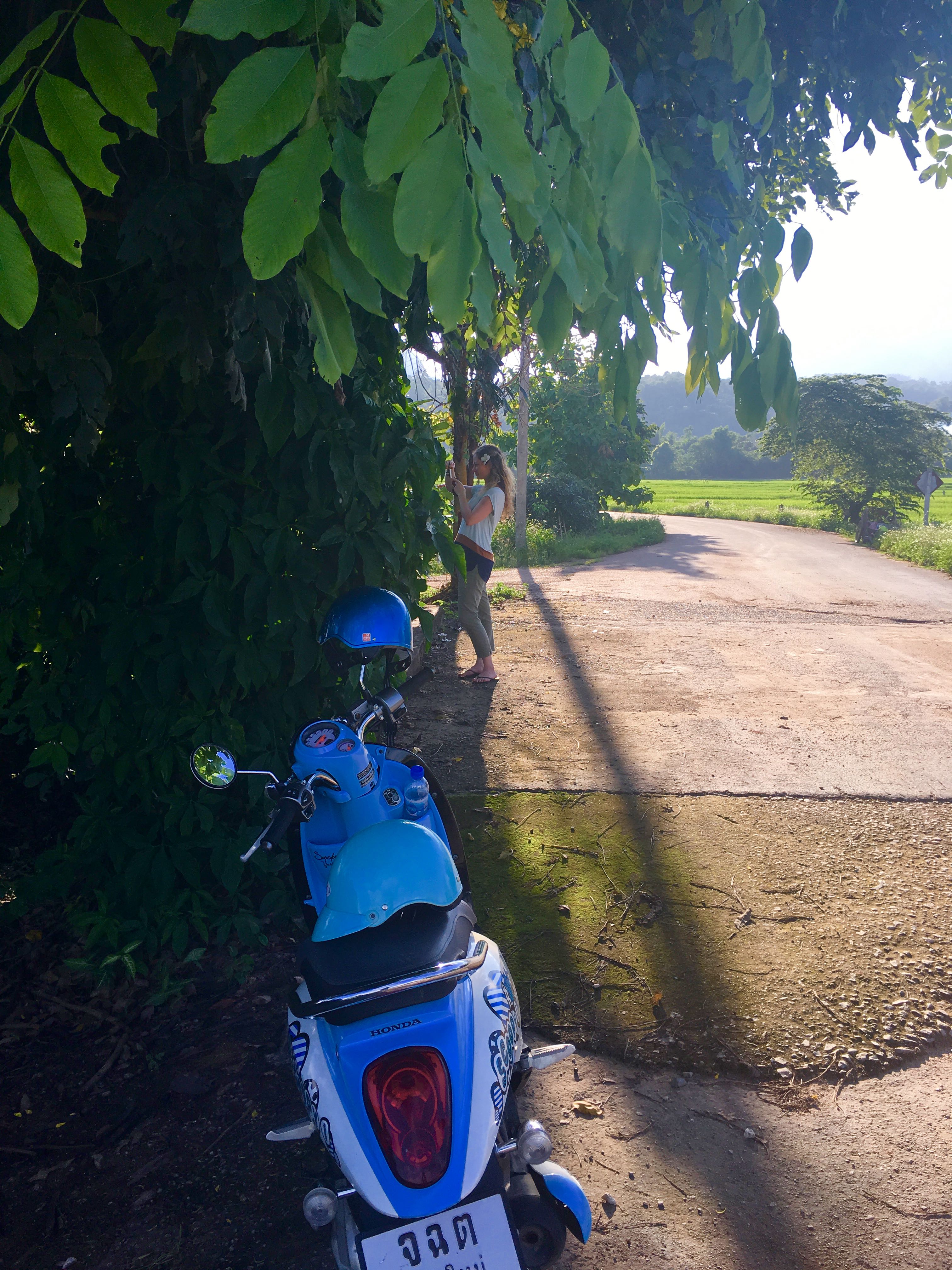 and blissing out at a wonderful place called Nest 2 – little bungalows nestled up against the foot of the sacred mountain Doi Chiang Dao, near the Chiang Dao caves.

Spoilt with amazing local food by a lovely chef named Oh who was happy to chat to us at length about her life and family and her passion for food. She used us as guinea pigs for some of her recipes (the sweet bamboo shoot dessert was simply amazing), and completely destroying me with some fiery Thai curries and soups. *Meg is a chili savant : her capacity to put away extremely spicy dishes both impressed and frightened the HELL out of me. Respect.

Exploring the bat-filled catacombs of Chiang Dao cave with our Burmese guide giggling “watch out for the bat sheets” as we climbed and weaved and ducked through the inky blackness of the massive cave system lit only with the dim glow of a kerosene lamp, 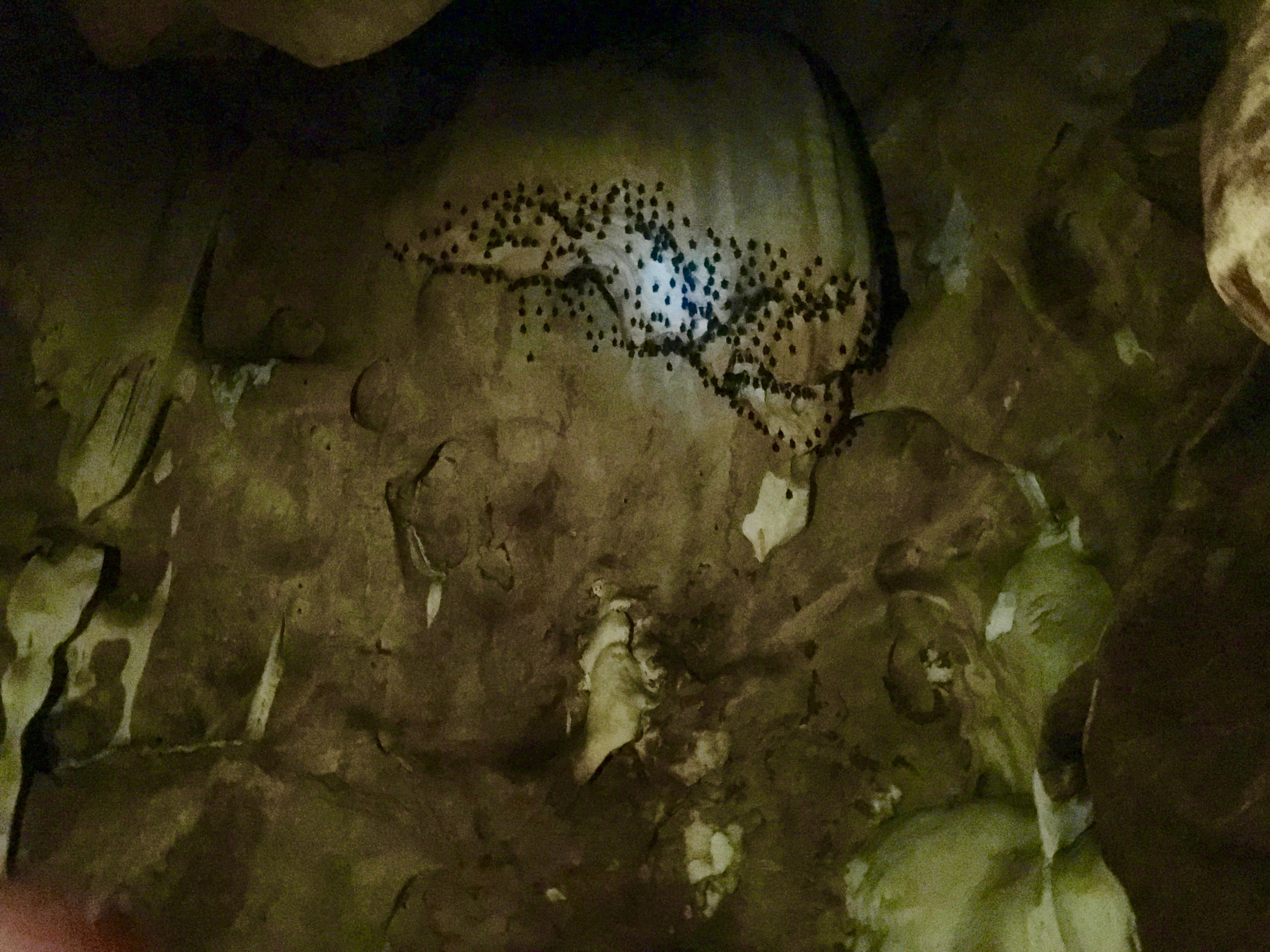 and finally relaxing at the Makhampom art space when the rains finally came through in earnest was heavenly.

Even though the weather turned on the rain for us we still got out into the last teeth of the Himalaya range and immersed ourselves in nature, wandering through the jungle trails and villages alike, talking and exploring, enjoying the silence of the stars at night and looking for elusive fireflies in the gardens over dinner.

It would have been easy to stay there for weeks, but it was time to move on so we hopped onto the green bus again and off we went, overnighting in Fang (not much to see – shitty business hotel, very industrial but great noodles at the food truck). We got out of there are soon as possible early the next day.

The next stop was the surprising Tha Ton.

The guide books wrote it off as a small town with not much to see but it was really a quietly bustling regional centre with some amazing sights and stunning views over the valley  – AND a great little coffee shop near the bridge barely mentioned in the Guidebooks but actually wonderful and welcoming.

For example Wat Thaton on Doi Thaton was simply stunning – looking like a porcelain teapot but containing the most wonderfully peaceful museum with artworks, texts, and sculptures with a heavy Chinese influence donated from around the world. 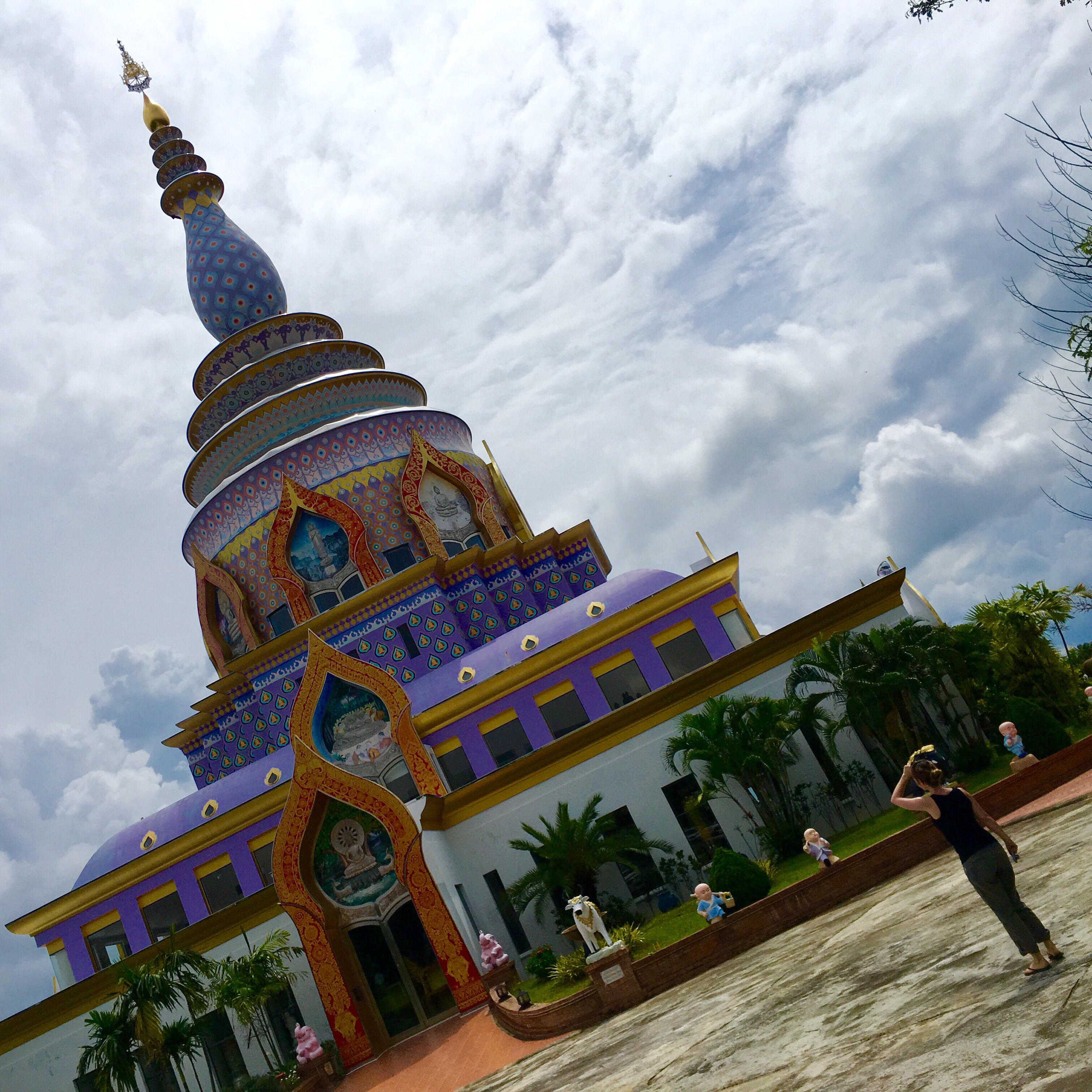 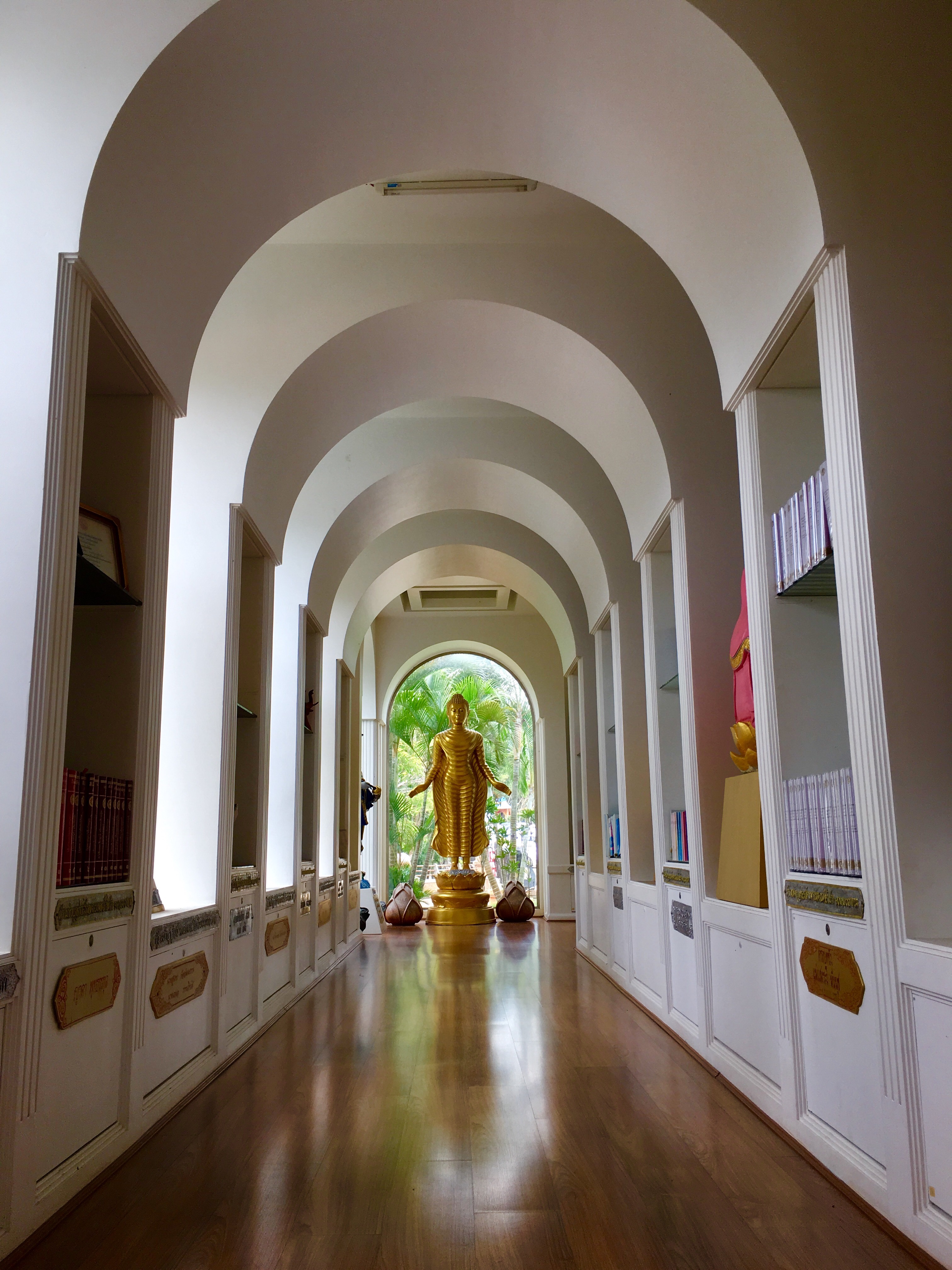 And the views! overlooking the Thaton valley with views over into neighboring Myanmar.

So we hiked around the mountains and explored the town in the brief time that we had. Ate at a shitty farang style eatery and instantly regretted it. Especially the deep fried frog.

Staying in a ‘resort’ (I wont name it – it truly had seen better days) but right on the river close to the bridge, perfect location but really rundown. It was managed by a thai version of Basil Fawlty and his non english speaking (but extremely good mime) wife. They tried really hard though so it almost made up for the places shortcomings.

It was an adventure all by itself, but as we’d been traveling together for well over a week now the heat, lack of privacy and the constant travel had frayed us both a little around the edges.

For two people used to roaming alone, a week in another’s company was a long time.

There were loose threads hanging, waiting to be tugged.