There a war of sorts going on here in Thailand. Its an urban battle fought house by house, corner by corner, street by street. Every man, woman and child armed to the teeth, ready to engage.

Pickup trucks full of masked combatants prowl past the safety of the hostel windows. The wail of ambulances echo through the streets which are starting to fill again after an uneasy ceasefire overnight.

Here in Chiang Mai today, shellshocked Chinese tour groups wander aimlessly – all colorful dazed and confused – dragging large clattering suitcases on wheels over the rough concrete roadways looking for escape much like a gaggle of geese crossing a busy freeway.

It’s Songkran 2017. Thailand’s New Year Water Festival celebrating the end of summer and the start of Wet season – and the largest water fight on the planet.

The only way to survive is to submit.

Songkran is a 4 day party where most Thais head home to their families and celebrate a New Year. Tourist (and drunken asshole) numbers swell unbearably. Many shops are closed but the bars are open late. Alcohol runs freely even as hostels run out of fresh water. 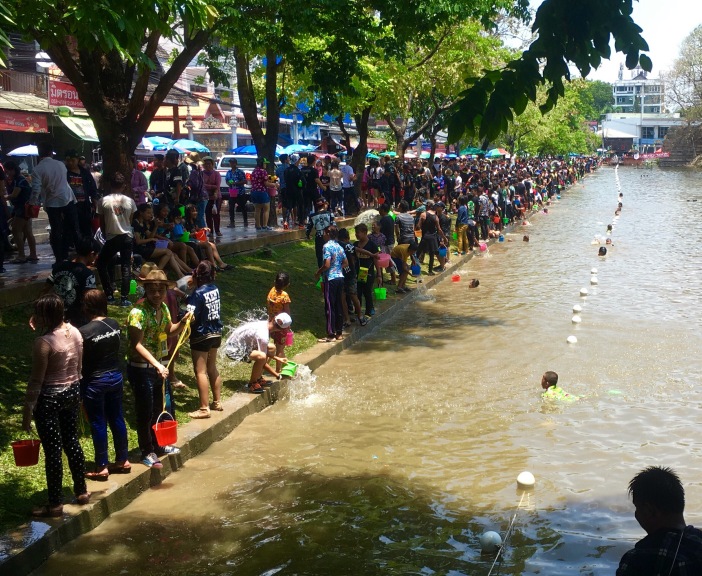 High pressure water cannons, fire hoses, bathtubs and garbage bins, massive 44 gallon plastic drums of iced water, blow up swimming pools, large eskys – anything that will hold/throw water – line the streets and are set up on most street corners and traffic lights where a pedestrian, scooter or Songtaew must stop. Then the flouro-coloured cackling crazies descend and a watery battle ensues.

Riding in a Songtheaw (red truck)? Tough luck. the driver will pull up at a corner/traffic light/roadside and let his passengers get completely ‘blurged’ (thats my new word of the day).

Riding on a motorcycle? Too bad – you will cop a thorough ‘blurging’ at 60km per hour . It’s deadly but hilarious to watch .

This year’s stats are in and its not looking great (although deaths are down. Yay less death!).

Sobering, you would think . Nah. Each year it’s about the same.
In Chiang Mai the entire Old City Moat several kilometres around – both sides – is filled with little booths and stalls selling food, drinks, water pistols, plastic bags and hats as everyone tries to make a quick baht and have a good time.

All the alleys and side streets are covered. There is absolutely no escape.

And this shit happens all over the country!

Firstly – Pray to your Gods.

Wallet and cash in a cheap plastic bag. Check.

I head out onto the packed streets with the aim of my usual walk from Nimman down to the Old City, around the moat and then back, just to see what the fuss was about. Usually takes about 90 minutes there and back.

A few steps out the door of the hostel I was hit in the face with a bucket of ice cold water – and this kept happening for pretty much the rest of the day.

2 hours later I stumbled into the Starbucks at Thapae Gate and gave up. It wasn’t even 1/3 of the way. Sunbaked, crowdshocked and soaked to the skin in a fruity cocktail of warm green mucky moat water and freezing cold ice water, my inadequate plastic protections leaking and damp, and feeling ill from the gallon of green moat water that had been forced into my nose/mouth/ears.

I lasted 5 hours on the unforgiving streets and then retreated to the hostel, slinking back through alleys like a gunshy dog. Unfortunately, my sleepy hostel Bed Addict – Nimman ( 350 baht/night, close to Maya, my beloved cinemas, vegan eateries and some cool coffee shops) had been invaded by a group of loud party hard American students that had trashed it like a college dorm room.

With no dry clothes and no escape, I was trapped in my hostel kitchen – the quietest place I could find. Outside, the artsy part of town had turned into a techno-pumping foam-partying disco-lit aqua-nightmare.

Add to that the several competing foam parties, massive dance parties, and a dude in a tuktuk with enormous WHOOMP WHOOMP speakers parked just outside my dorm window and my night did not improve.

The walls of the hostel were vibrating as was my head. I jammed in my earplugs and tried to tune everything out – the thought of engaging and going out into this nightmare was unappealing. I wasn’t here to party.

But I’d finally figured out the main problem – I was resisting.

Recheck my attitude. The key? – gotta get involved.

Upgrade the plastic bags to waterproof cases for phone and wallet (on sale everywhere). Check

Get a cheaparse sunhat for 25 Baht. Check

Lasting 6 hours on Day 2, I had a much better time of it. The best advice is rather than fight it, just go with the flow. Accept that you will be wet and hot and cold and covered in white paste for hours on end. Its all in good spirits and is actually a ritual blessing, so feel free to return it as often and to as many people as possible.

The lovely Thai people will (mostly) respectfully splash you or gently anoint your face with white powder or paste, the kids will love a waterpistol fight, and the littlest kids will giggle and smile like angels (right up til the point that their older siblings sneak up behind you and dump ice water down your back – after which everyone bursts into hysterical laughter). It’s so much fun.

It gets trickier with the tourists though.

Usually some screaming psychotic tourist (see example above) with a massively expensive water cannon will run up to you and blast you in the face, knocking your sunglasses off or half drowning you before yodelling off into the crowd. Best to steer clear if possible.

But if you are up for a water war, then there are plenty of other soldiers here that will accommodate you.

Day 3. Flick to Saturday morning and its an uneasy ceasefire – the celebrations are winding down but the odd water-pistol bearing straggler refuses to let go. Its still impossible to rent a scooter in this city as there are so many tourists, but the traffic to the airport is increasing as the tourists vacate.

The crowds are still there though and accommodation still hard to find. The mood is high but the celebrations are winding down from crazyassed to an almost manageable level. 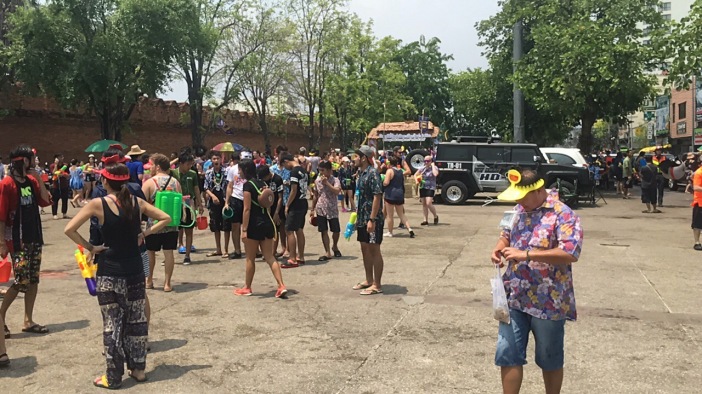 *Still no sleep as the partying Americans have been replaced by partying Chinese students.

Day 4. Ahhh better. Now is the time to hit the Sunday Walking Markets, chill and explore the spiritual side of the festival as the craziness abates, with early morning happenings at the 50 or so temples around town, or better still up on Doi Suthep peacefully overlooking the city. 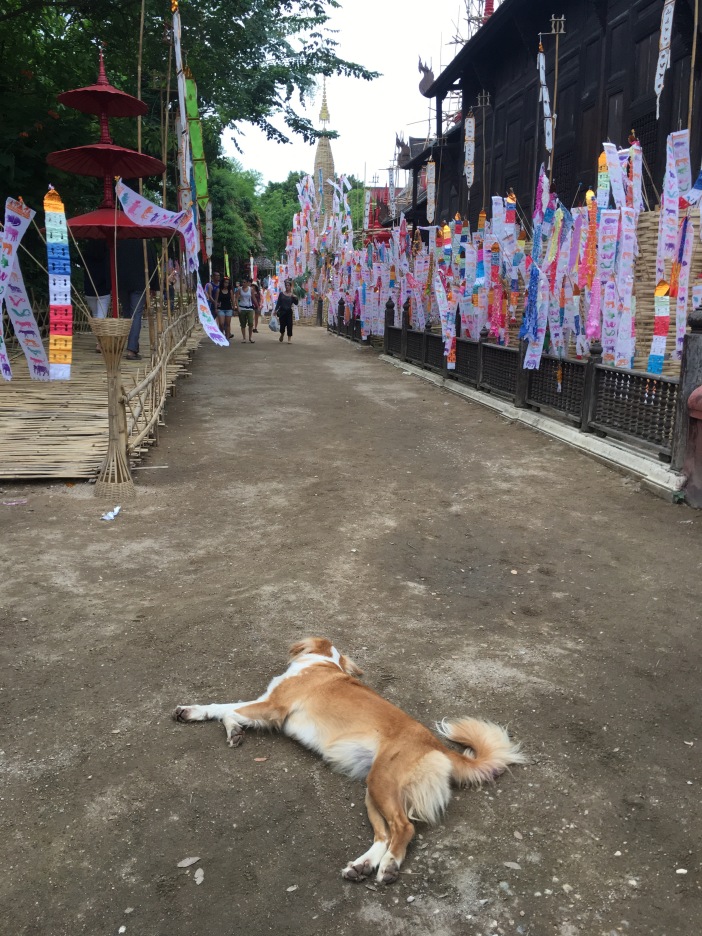 Songkran 2018 – it was so much crazy fun, but next year remind me to be on top of a tall mountain, anywhere but here.

*so tired today I rinsed my glass in a sink and then drank a glass of tapwater today without thinking. Lets see how that goes.

**written over the 4 day festival but finished on Monday morning after no sleep for 3 days and totally stressed out by the frenetic pace of the holiday weekend.