Last night I saw one of my teenage idols – Pat Benatar – live in a small Indian Casino close to here (SO good), then met a friend at a local bar to catch up after.

That turned into another post 3am night out. As a result I am slightly hung over today and my thought processes aren’t quite firing so this could be a total waffle – bear with me.

I hadn’t thought much about it until my second coffee this morning to clear my foggy head.

Replaying last night as best as I could, this little thing stood out.

When did I stop giving a shit?

More importantly how come people can see it? What’s happened to my masks? Hmmm…

There was a time where the thought of sitting in a bar and talking to people frightened the Hell outta me (that was a while ago admittedly), but these days – pffft – easy peasy Japanesey (sorry about the casual racism – its a generational thing).

Now I comfortably jump onto a plane, live in a foreign country for months, make new friends and form connections almost as a byproduct of just being there.  (ok so its not beer and skittles all the time but generally its pretty good)

So WTF? When did that happen?

I guess quitting work and striking out in a new direction has really been the last bullet in the head for my care factor levels and it must be showing.

This social anxiety thing that I’m hoping most of us feel in a strange situation was really amplified when I was a kid. Super shy and quiet,  I would rather read, wander or talk to my horses than interact with people.

You can imagine how that went down once I hit school.

Overwhelmed, I ran away on my first day of Primary School and climbed up high into a tall tree out the front of the school – the Year 6 boys had to climb it and get me down. That happened more than once and the tree’s still there I think, at Wombat Public School.

*my sister and I back in Ye Olden Times.

High School wasn’t much better (less tree climbing though) and opened a whole new can of worms. Who exactly was I? How to fit into this micro-society, an odd shape that didn’t quite belong anywhere (at least in my head that’s how it seemed).

So I settled on being ‘clown’ : a funny/smartass camouflage developed as a survival mechanism at school, a sarcastic shield of protection and emotional armor, a way to overcome paralysing shyness and low self esteem – a product of many factors that I’m not going into. Today.

Girls? Not a chance. Baffled. Clueless. Completely oblivious (well at least ’til High School). Embarrassingly so. Head up my ass introverted.

Looking back, so many “Ohhhh so THATS what that was about” moments that I had no clue about at the time.

*my favourite school Photo – the last one I ever smiled in.

So anyway it’s taken a while to overcome all that – remember my ‘fake it till you make it’ motto?

Well many things, but I think its basically the “care factor” – caring about how you look, how you dress, what you say, what the future holds, whats happened in the past, what people think of you (that’s the killer one). Money, career, marriage, houses, fancy cars, stability, conforming, fitting in, following the rules. It’s all a trap.

So the lower the care factor, the freer you become. So simple!

Is it the same as confidence? I don’t think so but perhaps it can be mistaken for it.

Maybe reducing the care factor brings you closer to the actual person that’s buried underneath all the layers of bullshit – letting go of the emotional armor, masks and defence mechanisms that keep us emotionally separated from other people, that stop us creating actual real soul-to-soul connections instead of only temporary insubstantial surface level encounters.

Derrr… of course it is. You know this already. Everyone knows this, right? Feel free to bail out.

But I’ll continue my thought regardless…

Let the ‘this is me’ of you peek out from behind the curtain and take a tentative step forward and be. To the ‘real’ if it.

Other real people will respond. They’re hungry for it just like you are.

(All this is assuming you aren’t really an asshole underneath and in that case, all bets are off)

There’s to much bullshit in this world already. Why contribute to it? That’s just sad. 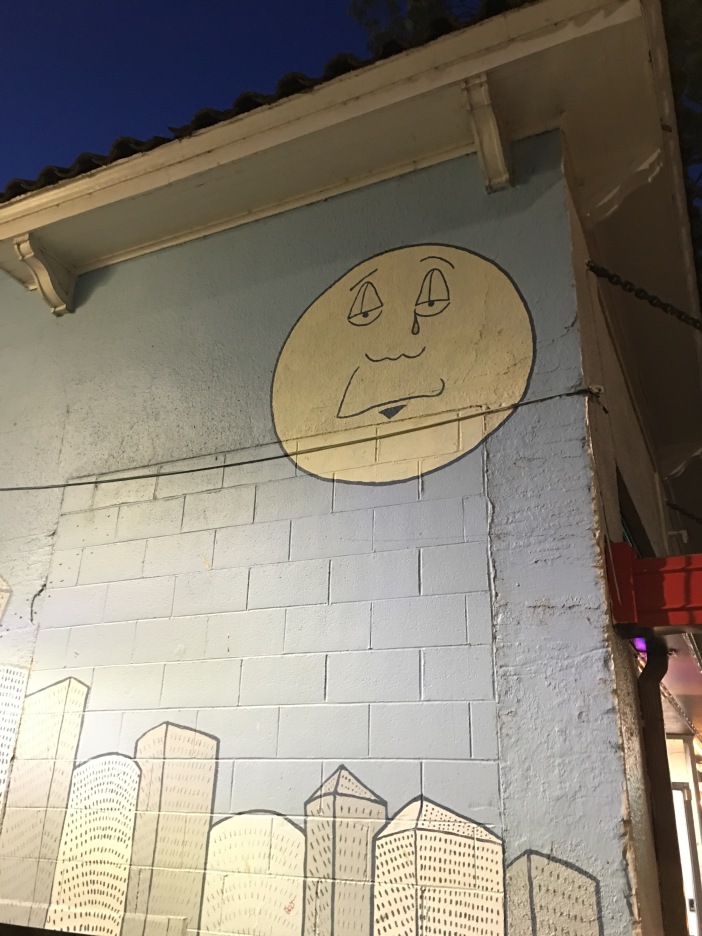 We saw a lot of masks at the BroHo last night. More in the late night diner after, even more outside the clubs and bars in downtown Olympia as the 2am crowd oozed out into the chill air, hunting for the next club or burger.

Reality and bullshit clash after 2am, hungry for a fight or a fuck or a hotdog in the dim alleys or neon lit streets, queuing in club doorways and dark places smelling of urine and dogshit where the hopeless homeless live, hidden in the clouds of cinnamon vape smoke or in the pungent wafts of weed enveloping like warm spots in a cold swimming pool as you dodge through the crowded sidewalks milling with circus freaks and pretty party people .

An unrehearsed ballet of bullshit – all pretenders and posers, creeps and creepers, homeless and hopeless, the lit up and the hyperactive, the happy and clueless all lipstick, glitter and laughter, or the sobbing high heeled dripping mascara tears, tattooed with torn black stockings , cats eyes and smeared facepaint. Everyone masked up and parading at the Ball. This is who I want you to think I am.

It sounds like I think I’m different from them but I’m no better or no worse – definitely less fake than I used to be and still a work in progress.

The realest person I met was a dog that some dude brought into the bar. He was just happy to be there.

Anyway, my meandering point is that I think my care factor has finally dropped to a level that can set me free.

Wow this coffees kicked in I think. thank God. That was quite a rant.

Still here? Here’s a pic of a cute chipmunk on Mt Rainier as a reward.