It’s New Years already. Where the heck did that come from!

The past few months have flown by and it’s only 6 weeks or so til I get back!

(this is a rather negative get sh*t off my chest post, so feel free to skip…)

In case you havent been paying attention, I made it to Antarctica (duh), have been happily working away here since early November, and I gotta say – it’s been a mixed bag of experience compared to last summer.

I’m not going to wax lyrical and gush about begin here – the reality is it’s been a little hard to adjust this time for a few reasons.

Let me catch you up quickly then while I have some alone time. 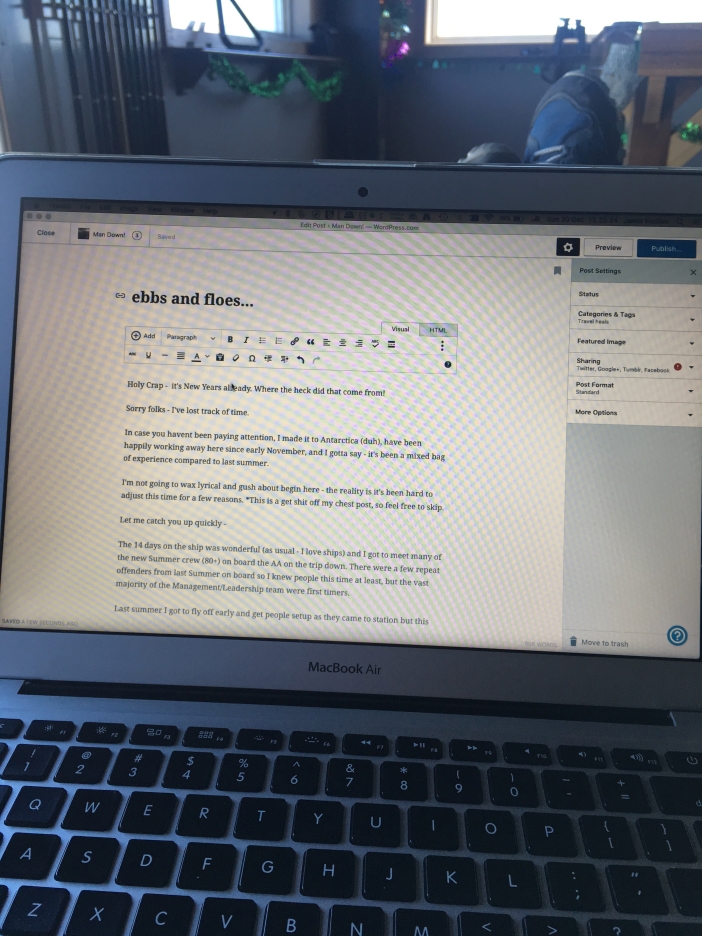 The 14 days on the ship was wonderful (as usual – I love ships) and I got to meet many of the new Summer crew (80+) on board the AA on the trip down. There were a few repeat offenders from last Summer on board so I knew people this time at least, but the vast majority of the new team are first timers, and as we all know First Timers are too keen, bloody annoying and fuck-up magnets.

*Also being told how to do something by somone thats never actually done it before – and you have – is simply an unmitigated joy!

It was massively satisfying to see some of my crew from last summer (left behind for the winter season) to catch up quickly and then slip straight back into my old desk with my old computer and my whiteboard with all my handwritten notes still there, just as I’d left it.

I felt instantly at home being back at Davis Station.

It was like returning to work after a long weekend, rather than the 8 months it had actually been.

The weather here has been bizzare – practically no snow and ice, the days are warm and no wind to speak of. It’s positively un-Antarctic but makes for nice walks and exploration of the station limits. The sea ice is still intact (although getting a bit melty now) and the animals wont come in until it starts to break up – that will cheer me up immensely. 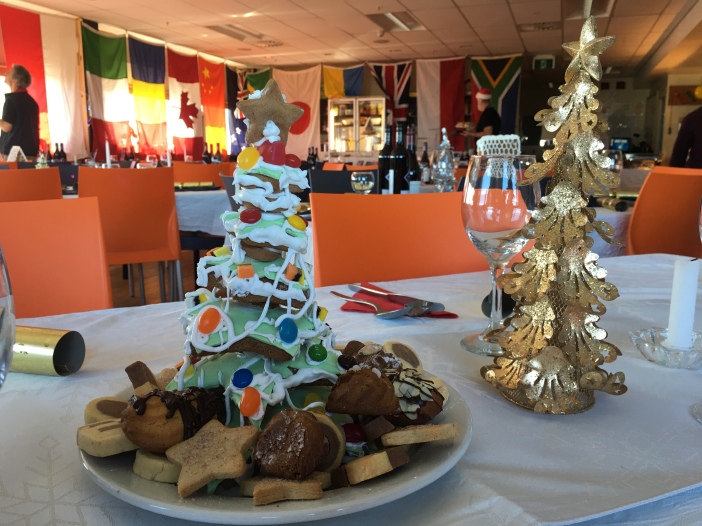 We’ve had a few formal dinners (which are amazing) and few birthdays. Lots of interesting people moving between stations though as their science programs develop and adjust to the weather conditions.

It can get a bit like the Big Brother house when they drop the Intruders in – unexpectedly disruptive.

There as some fascinating science happening this season though – semi autonomous submarines mapping the underside of glaciers, laser and radar systems popping up all over the landscape scanning snow ⛄️, weather and penguin 💩 for all I know. Biologists counting things, Surveyors surveying things, geologist teams tap-tap-talking at the rocks, oh and moss. Mustn’t forget about the moss team roaming around poking under rocks looking for interesting moss and lichen.

A few days back Santa and his elves delivered our Secret Santa presents – a tradition where handmade gifts are created and exchanged by the Expeditioners on station. (*I got this beautiful handmade storage box made form scrap wood on station by one of the chippies – thanks Hayden!)

The whole Santa thing is hilarious as he turns up in the Fire Hagglund, ‘pulled’ by Reindeer and assisted by the Elves. Its a great moment of togetherness for the whole station team. Then it all kinda goes downhill once the bar opens.

Christmas always puts me on edge though, hence this ranty post I guess.

Also the old ‘don’t you just turn it off and on again’ thing is getting really fucking old.

Then there theres the old chestnut of manners. Last season I had little personal space or privacy and had people shoving their IT gadgets under my nose and offloading their complaints about the IT side of things in place of simple civility and ‘Good Mornings’, usually in between mouthfuls of my breakfast/lunch/dinner, while making a coffee, walking on the beach, and once while cleaning my teeth in the bathroom. It started again as soon as I hit the station.

The first time someone walked up and shoved their phone under my nose while I was eating this season, I stopped that shit dead in its tracks. Fuck that.

The downside is that I maaaaay have gone too hard too soon and there’s now a blindingly clear “do not approach during downtime” aura beaming out now …”in for a penny, in for a pound” as they say.

I haven’t been off station yet so I think I’m getting a little stir crazy.

So whats been happening?

Work/eat/sleep/wake/repeat. It’s Groundhog Day again but that’s on me as I haven’t felt like doing anything different – as I said its a totally different feel this year with a LOT of new people here that have never been South before.

The rabid excitement of the newbies gets old really quickly though and the forced, fake politeness drives me nuts. Damn was I like that last year?? I guess its easy to get a bit jaded.

Look I’m certain it’s just me this time – the ‘traveling alone’  thing this year made it really hard to adjust to being cooped up with 80+ people, and there are a few large personalities this year that are driving other people nuts as well.

The odd thing is that I’m finding myself consciously pulling away from people more and more here, either by eating outside of mealtimes, watching a movie in the cinema (ahhh my sanctuary) or hiding/sleeping in my room.

*Plus the shittest metal or hard rock music is playing most of the time: which is totally fine for a few days but 4 damn months of it?

**Also if I hear ”American Idiot one more time I’m just gonna lose my shit. Stay tuned – could be fun.

NOW that said, there are a lot of nice, lovely, smart people here that I do like a lot and will happily hang out with when my social batteries are charged enough. We hang out together in a small crew – usually at the Station Bar.

Do I want to be here and come back? Am I still in love with this experience? Heck yes!

It may not sound like it but hey, let’s be honest, some days are better than others and new crews are much the same 🙂

So my applications in tomorrow for next season with the AAD!

Ive been thinking about why it’s been so draining energy-wise this season – the little bit of yoga and meditation I do isnt really helping and it just seems that I have nothing left in the emotional tank – my energy is being continually drained dry.

Usually I can recharge faster than this and grab some juju from the people around me.

It’s more of a constant ebb rather than an exchange : nothing reenergises me at the moment and I dont know whats up with that.

Possibly the solo travel drops your guard against these energy vampires a little more than you think.

A good long hike off station is well overdue.

***Also I ABSOLUTELY HATE this time of the year.

It’s just me after all.

I’ll do a more positive and less ranty post soon.