After 5 months of stress, anxiety and dislocation with uncertainty and isolation my bedfellows every sleepless night since March, I’m finally on my way out of the dumpster fire that is Australia 2020.

Unfortunately not on a ship (so the Exodus analogy ends here) but rather a grumpy and sour Qantas flight to Sydney and then, in complete contrast, a chirpy and upbeat Air New Zealand flight to Auckland.

With travel being booked for Monday 10th, after a 7 day delay while we anxiously waited for the Critical Worker Visa to be approved  – the final step before being allowed to enter New Zealand – those eagerly awaited words came through Friday 7th from Kiwi Immigration : ‘Visa Approved’.

Thank the Maker, as Threepio would say.

All the prep work had been done : a last Nepalese dinner in Manuka for my housemates birthday, say bye to some friends, then pack my two bags and a quick clean of my room would see me out the door and on my way finally.

Was I nervous? Hells yeah.

My baggage wasn’t pre-booked because of some Covid19 made-up crap and I was a little nervous that I wouldn’t get my two bags and a guitar case on board the shitty little Qantas plane from Canberra to Sydney. Despite talking to Qantas directly (they suggested I just try it and see what happened), and the NZ Travel Agent (via AntNZ) who basically said “yes/no/yes/no/we aren’t sure” I could imagine myself repacking the absolute bare essentials for a year in Antarctica into one bag on the Check-In Counter floor and calling my housemate to come get the rest.

In fact that was Plan B – my housemate would circle the carpark and if I was denied my three bags then she’d come in and grab the excess for me.

Waking every two hours (is it time yet?) until it was time to go, the baggage was still my major concern and had plagued my dreams. Dammit I hate travelling with more than my little backpack.

Waking at 6am, the first thing I did was repack and remove several items (1kg of muesli, a book, a third laptop – yes all totally unnecessary in the cold light of departure). This at least brought me under the 23kg weight for each and gave me a little more confidence that this would work.

The short story is that Qantas was going to charge me $100 extra for a bag but couldn’t work out how to do it, so just loaded my three bags up and said “take care of the payment in Sydney”. 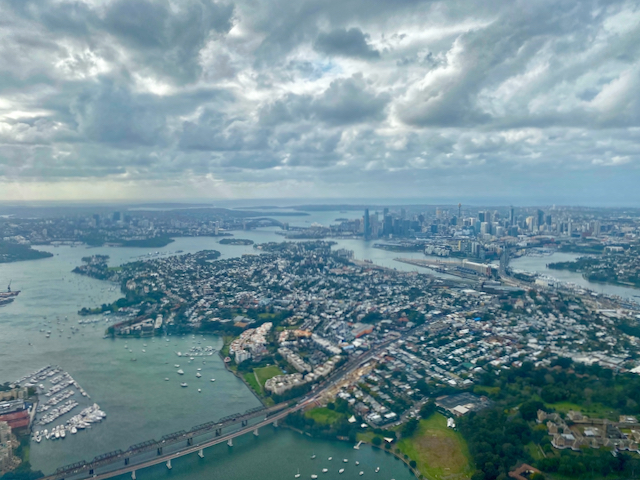 So crashcut to Sydney – I grab a trolley (4$), my bags (first off the carousel) and race to the taxi rank. I only had 95 minutes to get to the International Terminal, recheck in all my bags, stage manage the inevitable drama for the extra bags, get thru Customs and Immigration and board the plane.

NORMALLY this wouldn’t present a challenge, but factor in Covid19 hysteria and the fact that Sydney is fucked, there were a few hurdles.

Firstly, the cabbie (a lovely middle Eastern gentleman who looked to be in full costume for Aladdin) helped me with my bags and then told me he couldn’t turn the meter on and I’d have to pay $30 for the short taxi ride as he didn’t like losing his place in the queue.

I pay the man and mutter a quiet ‘shukran’ (yep made a bold assumption there), grabbed my receipt and bags, grabbed another trolley (4$ cash – credit card broken sign), and raced half way up the wrong end of the terminal (cos I’m stupid), came back to the Air New Zealand Checkin counter…where there were about 40 people lined up before me, all with at least 3 bags and most with tired and/or confused looks.

I line up, mask up with my Kathmandu-dust quality facemask and start sussing out what’s going on.

Nobody in the line even comes close to looking as stressed as the Air New Zealand staff behind the counters. Chatting to my fellow linespeople, it turns out that the majority of the passengers here just got off a flight from Melbourne (ohshithoshitohshit…) and because they were all going into 14 day managed isolation in New Zealand, had brought bags upon bags upon bags with them – so many so that the flight from Melbourne couldn’t take off due to being overweight and had to have a chunk of the baggage offloaded and forwarded on another flight.

(Curse my stupid need for things. These extra bags ended up costing me an extra $390 at the counter. Thanks a lot Covid 19. You suck more now.)

Throw in that each and every passenger needed to have NZ Immigration final approval to board – yes the Check In staff had to phone a NZ Immigration hotline to obtain a authorisation code for EACH PASSENGER IN TURN meant that it was taking about 10 to 15 minutes to process each passenger and baggage. Doing the math (40 x 10mins = > 45 mins – I’m going to miss the flight). Panic.

For a minute : then the realisation that this was a large percentage of the passengers so they wouldn’t leave them, surely. Luckily they’d held the flight as Check In was such a slow process.

Immigration and Security was actually quite quick, although in typical Sydney fashion the Border Force officials could barely interrupt their chat about smoko while processing my Passport manually (the auto machines offline) and barely even made eye contact except to check the Passport picture.

The remainder of the trip was largely uneventful – a full third of the passengers looked to be asian students from Melbourne transiting Aukland to other New Zealand ports unknown. That’s a direct observation: they called for all transit passengers to exit first, and fully 1/3 of the planes population stood up, blinked, grabbed/dropped/clutched their bags at the same time, bumped into each other and raced for the exit. There were a few caucasians in the mix, but not many.

I have to say, from the moment we left Australia, the Kiwis had this Covid19 process down to a fine art.

The service on the plane was slick, Covid safe and efficient. The exit process was staged and orderly, the Ministry of Health people and Defence plus Police were there to oversee, but Covid 19 Incoming Passenger Processing ran as smooth as a greasy pig on an oil slick.

Hmm…the mental image that conjures doesn’t work. Its more like the Australian system.

OK – ‘like a well greased belt driven assembly line’ might be a better analogy for the Kiwi system.

The processes were there, everyone knew what they needed to do, and it took about 45 mins of processing to go from the plane to the bus to the hotel – all Covid-safe and sound.

**B is for Best – as one of the Police guys joked when he asked to see my card. What a lovely chappie.

So just get off plane, follow the friendly and fear-free instructions, safely line up for Health Check, then Immigration, and Visa check, out to Bus line, bus to Hotel (with a friendly Hotel safety induction, another health check, interview and other suchness). No fuss , no drama, just efficient.

The managed isolation facility here in Auckland  (or the one I’m in at least) is the Waipuna Hotel and Conference Centre – a lovely mini resort about 30 mins from the airport.

The rooms are palatial (twin double room for me – yes please), big windows and fresh air, the food is bloody amazing (3 cooked meals a day plus morning/afternoon tea with barrista-made coffee available and free wifi), there are common areas we can go outside into, escorted walks in our own dedicated prison yard, and daily Health checks. 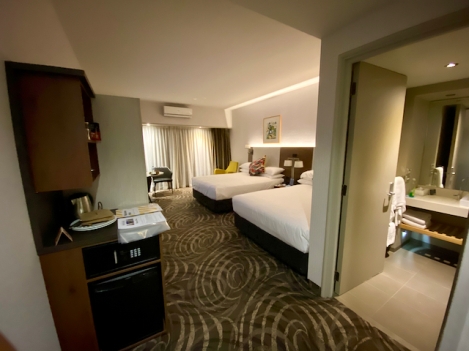 **none too shabby room and the best hotel food I’ve ever seen – Thanks heaps ! 🙂

All free courtesy of the New Zealand Government.

Two weeks here is like a peaceful free-but-paid holiday before I get stuck into the rigorous training for my winter ahead at Scott Base.

**FFKS – Auckland went in Level 3 lockdown today at midday until midnight Friday as NZ’s 100 day ‘Covid free’ streak is busted by a South Auckland family of 4 testing positive Tuesday afternoon. The whole supercity area of Auckland is under stay at home orders with noone in/noone out.

Hopefully this will blow over by the time my 2 weeks are up and I can actually get to where I need to be!

Ahhh…back to the uncertainty I guess.

At least this place beats a mattress on the floor at a friends house – accommodation wise – so I can’t complain too much.